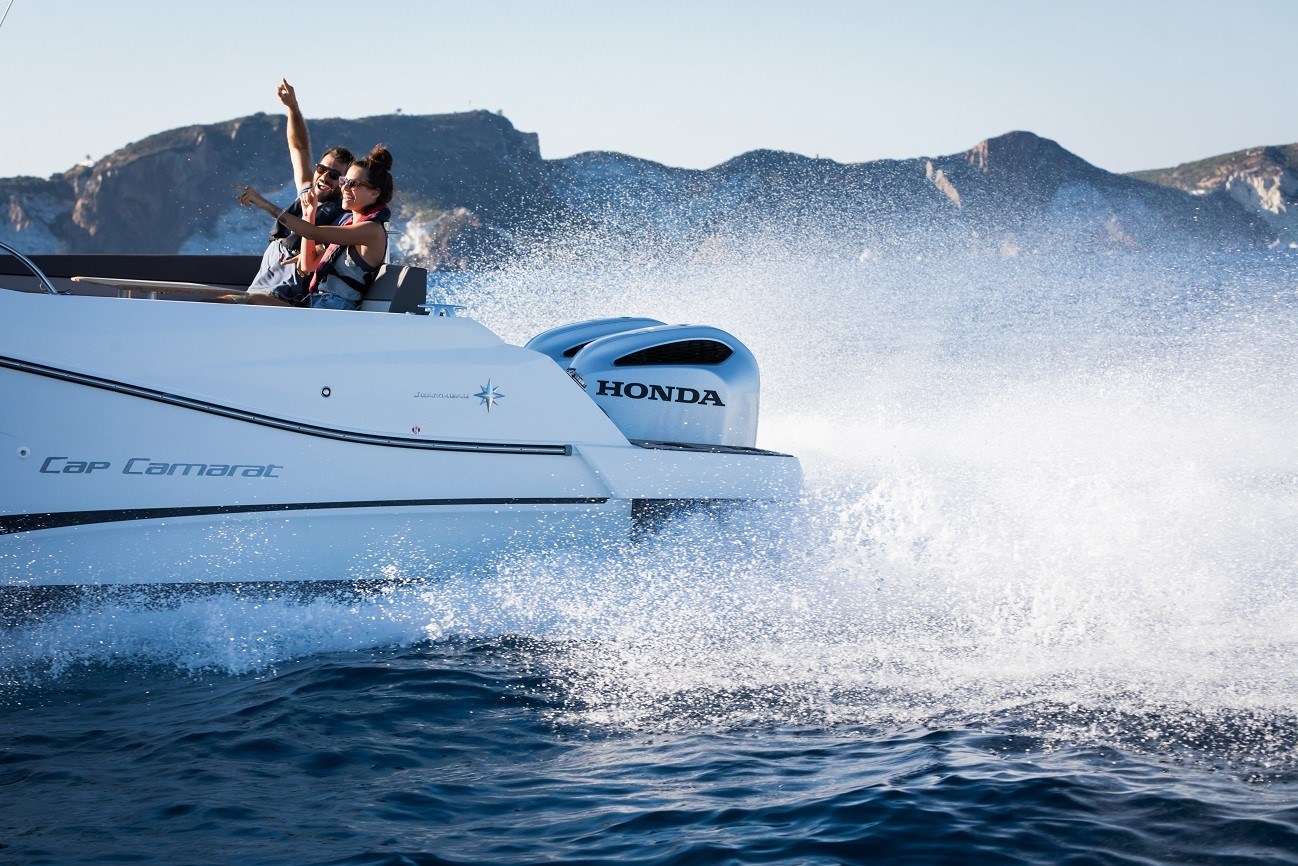 - Available to purchase from late 2018

Honda Marine’s top of the range BF175, BF200, BF225 and BF250 outboards have been given a new lease of life with a comprehensive overhaul as part of Honda’s ongoing evolution of its product line up. Making their UK debut at the 2018 Southampton International Boat Show (14th-23th September), these new flagship engines are set to reinforce Honda’s reputation for producing quality and reliable outboards.

These new engines will be display on the Honda stand which can now be found in the new position in Mayflower Park (stand number E070). The rest of the Honda outboard engine line up and inflatable Honwave offering will be showcased alongside a selection of Honda powered Highfield ribs, Honda’s official Boat Building Partner.

The new V6 outboards benefit from introduction of Drive by Wire, a sleek new appearance, enhanced reliability, streamlined maintenance and additional rigging options. The idea behind the renewed V6 motors is to enable trouble-free maintenance and maximum enjoyment with more time on the water.

Available to purchase from late 2018 from an authorised Honda marine dealer with prices announced closer to the on sale date. They will all benefit from Honda’s industry-leading six year domestic and two year commercial warranty, plus, with Honda’s commitment to safety, customers will be offered a free RYA Level 2 powerboat training course.

Steve Morris, Head of Power Products at Honda (UK), commented; “We’re very excited about Southampton Boat Show this year, our fantastic new stand in the heart of the Show in Mayflower Park gives us an excellent platform to showcase our new V6 outboards. With our full marine product range on display too, we look forward to welcoming visitors to our stand where we can show them everything we have on offer to enable them to enjoy many hours out on the water whether it be for work or leisure.”

All four of the new outboards feature Honda’s Progressive V Form design, with an exaggerated forward ‘V’ and a chrome-trimmed grill generating a modern, aerodynamic appearance. The new design is about much more than just style it also helps prevent water from entering the engine compartment as well as providing protection from paint chips and scrapes.

A dual-channel, indirect induction system improves airflow while helping funnel moisture away from the throttle body; and the provision of a new three-latch lock and seal system with two inverted grabbing points makes the cover much easier to remove and carry. The under-case design has also been streamlined to incorporate just three pieces instead of the previous seven and with less points of entry it helps reduce the risk of water entering the engine. In addition to the chemically treated, zinc-nickel plating with a high corrosion-resistant topcoat on the surface of the engine, the use of a heavy-duty rubber seal at the cowling base further increases durability.

What’s changed under the hood?

While the new 175, 200 and 225 inherit the same proven 3.6-litre V6 engine that powers the BF250 outboard motor, all four of these outboards have been re-designed to improve both reliability and ease of maintenance.

The air intake system has been redesigned and now has two vents on the top of the engine and one on the front. The two top vents are larger to allow a great capacity of air to enter and feed into the engine, while the vent at the front takes in air just to cool the engine. All the vents have a non-direct intake system to allow water and dust to be filtered away.

Saving even more time is a new wider oil gauge tube, meaning oil and filter changes are now much faster and more straightforward, plus oil change times have been reduced from 10 to 4 minutes.

The removal time of the Power Trim Tilt unit has been reduced from 60 to 10 minutes, as there is now no need to remove the stern bracket.

The oil pan, thermostat cover, upper mount cover and prop shaft holder are now made out of a tough, anti-corrosion aluminium, whilst all bolts and brackets have been treated in Honda’s “High Corrosion Coating for Marine” all of which increases the durability and reliability of the engine.

To further support durability and to protect parts, the number of anodes on each engine’s V bank has been increased from two to four.

The four new models feature a very broad range of rigging options, including either top-mount binnacles or side-mount throttles, for both Drive By Wire and mechanically controlled engines. They also offer newly designed push-button and key-start configurations, as well as multi-function displays to provide boaters with a customised on-water operating experience. The redesigned displays provide easy-to-view data on starting, operation and maintenance and benefits from the addition of a new standard tilt limit switch.

Designed to provide plug-and-play installation and superb control for as many as four engines and two helm stations, Honda’s Intelligent Shift & Throttle (iST) command system is a very valuable user aid. In addition to smooth, positive shifting, the sleek new interface enables the operator to fine-tune the throttle settings at any speed and to enjoy return-to-port capability as well as enhanced docking and easy slow-speed control. For multi-engine installations, iST also provides accurate synchronisation, giving the user the ability to operate the speed and trim of all engines from a single throttle or to tweak each engine’s rev setting and trim angle individually.

While Honda’s rugged mechanical ECU models offer key-start only, with operation of up to two engines and a single-helm location, the iST models are more flexible. Available with binnacle-mounted throttle levers for multiple rigs, or flush-mount side levers for single units, there are two options for starting the engine: a one-press push-button or an optional smart key system - the smart key has two functions, the first for keyless entry (like a car) and the second as an immobiliser –a Honda first. When the smart key control registers there is a key close by, the engine will start at a push of a button. If an attempt is made to start the engine without the owner’s remote ignition key, the motor start is limited, effectively immobilising the engine. If the owner loses the transponder key, an emergency mechanical key, paired with a passcode, will get the engine safely started.

All the engines are NMEA2000 compliant and in the unlikely event of a system failure, Honda’s new H-CAN system will kick in giving boat owners further peace of mind.

The outstanding technical features of Honda’s new BF175, BF200, BF225 and BF250 V6 engines are derived from exactly the same technologies that continue to power Honda’s famously reliable motorcars. In addition to items like the push-button start and the anti-theft immobiliser, key crossover systems include:

The renowned VTEC system uses a mild cam profile at low rpm and a high-output profile at higher revs for a blend of power, torque and efficiency that is unique to Honda outboards.

ECOmo is designed to adjust the air/fuel mixture according to speed and load, optimising efficiency for frugal cruising at between 2,000 and 4,500 rpm.

The history of Honda outboard engines began in 1964 with the GB30. Although 2-stroke engines dominated the market at the time, Honda's first product was an advanced 4-stroke model. "Watercraft should not pollute the waters they ply.” Honda has always respected this principle of Soichiro Honda in developing the BF series, its cleanest and toughest outboard engine range yet.

Now Honda’s current outboard range includes 21 engines spanning from the BF2.3 to the flagship BF250, all of which are backed by an industry-leading six year domestic or two year commercial warranty.

For further information and images:

There are further images are available to download from the Honda UK Media website – www.hondanews.eu/gb - under the Corporate section. 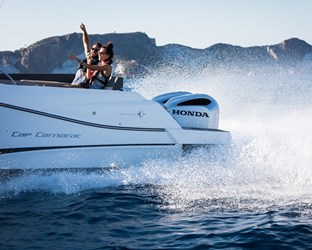