Verstappen and Gasly secure amazing 1-2 for Honda in Brazil 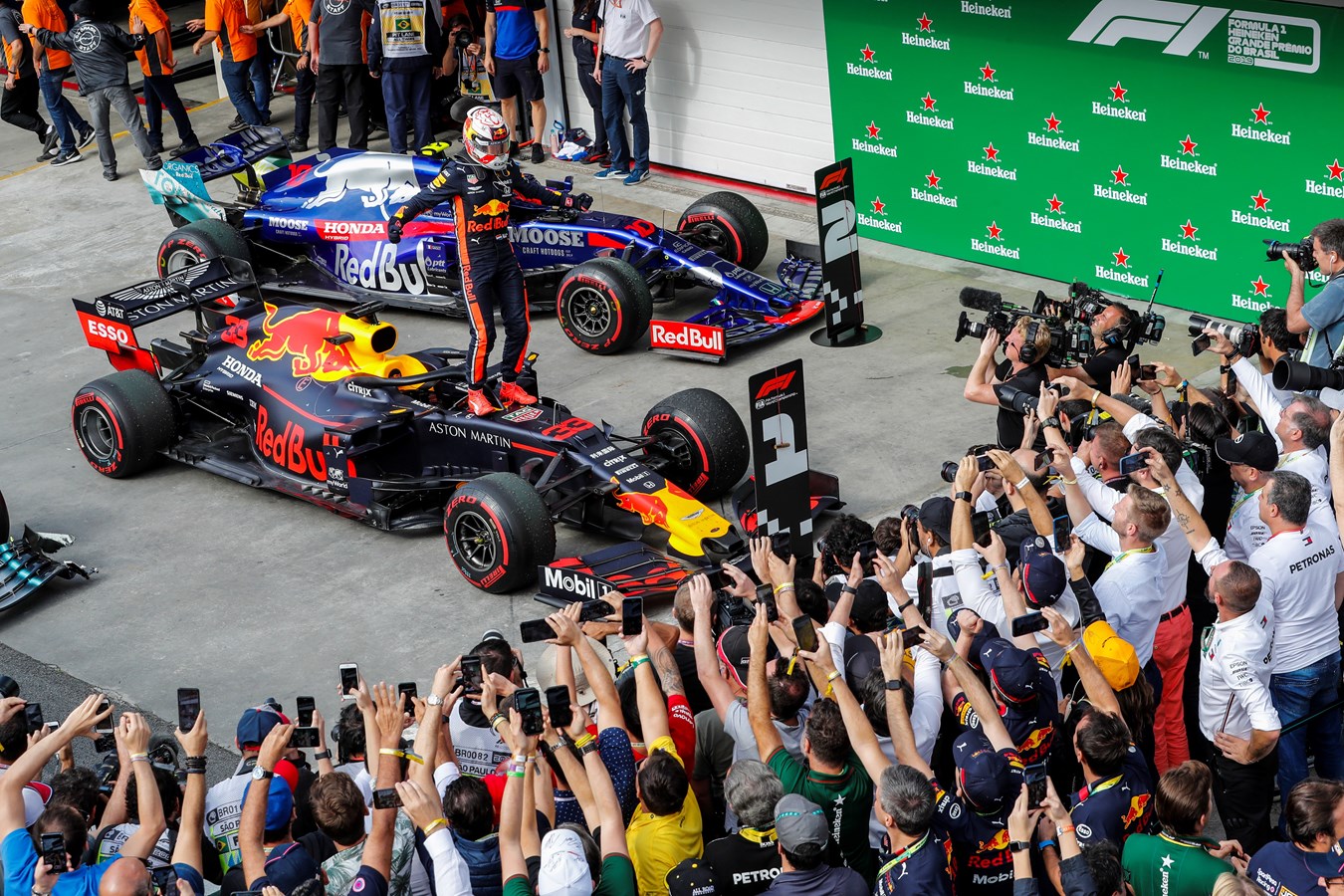 A remarkable Brazilian Grand Prix saw Max take his third victory of the season as part of a Honda-powered one-two as Pierre brilliantly scored his maiden podium, but there was heartache for Alex on the penultimate lap.

Max led away from pole position for Aston Martin Red Bull Racing, while Alex settled into fifth place ahead of Pierre in sixth in the opening stages and Daniil tried to fight back through the field from 16th on the grid on the medium compound.

On lap 21, Max pit for another set of soft tyres as he committed to a two-stop strategy, but an unsafe release from Williams saw him lose time and emerge behind Lewis Hamilton. Max immediately made amends by blasting past Hamilton into Turn 1 on the next lap and pulled away in the lead again. One lap later, Pierre pitted for mediums and retained his place as best of the rest behind the top three teams, while Alex came in on lap 24 and also put on mediums to open up strategic options. Daniil had actually pitted one lap before Alex to switch to softs but was finding it tough to make progress through the closely-matched midfield.

After keeping Hamilton at bay, Max made his second stop on lap 44 and switched to mediums, while Pierre went on to the soft tyre for the final stint three laps later and Alex did similar on lap 50. However, a Safety Car after Valtteri Bottas retired meant a tough decision and Red Bull made the right call to pit Max for more softs, even though it gave the lead back to Hamilton. Max again made light work of the Mercedes on the restart with a brilliant move around the outside of Turn 1 to regain the lead, while Alex executed a carbon copy overtake on Sebastian Vettel to move into third and set off after Hamilton.

Alex held off the attentions of Vettel until the two Ferraris behind him collided, bringing out another Safety Car that only left two laps of racing once the race restarted. Hamilton had pitted and dropped to third behind Alex and Pierre - who had both stayed out, as had Daniil - and although he quickly passed Pierre he then took Alex out at Turn 10. Unfortunately, Alex dropped to the back of the field as a result and was classified 14th, but Pierre moved ahead into second place and then thrillingly held off Hamilton in a drag race to the line as the pair ran inches apart.

Behind Max and Pierre, Daniil also enjoyed a dramatic finish to the race and rose to tenth place to pick up the final world championship point. The result marks the first Honda one-two finish since Japan 1991, and Toro Rosso’s best finish since 2008, as well as its second podium of the season.

This is our first win in Brazil since Ayrton Senna’s epic victory in 1991. Today’s win was down to an aggressive and intelligent race from Max and a well executed strategy from the team. To take a third win this season is a great result for everyone at Honda and Aston Martin Red Bull Racing. Congratulations also to Pierre Gasly on a fantastic drive in which he got the most out of the car to record his first F1 podium and also to Toro Rosso for their second top three finish of the year. Pierre performed well throughout the race especially in that last lap fight with Hamilton, which I’m sure will be a real boost for him. I am happy for him in what has been a difficult year. The car-PU package worked very well with both our teams and that has to be a good sign for the final race of the season and when we look ahead to next year. We would like to dedicate this win to our founder, Soichiro Honda, whose birthday it would have been today. Finally, congratulations to McLaren, with whom we scored that last win in 1991, for finishing on the podium today.

At the very end of the race, we managed to get second place with Pierre after a very close fight with Hamilton. Really, I am lost for words. This is our second podium of the year with Toro Rosso, which is wonderful achievement and it puts them in a very strong position to finish at least sixth in the Championship. At the start of the weekend, we had some PU issues, but thanks to the hard work of everyone in the team and our Honda crew, we recovered well and this is a great reward for all the hard work. We have worked with Pierre for the past two seasons now and so this is a great result in what was in some ways a difficult year for him. Our congratulations go to him and our friends at Toro Rosso and let’s not forget that Daniil also managed to finish in the points. This is a great boost for the team, but we must now aim to do even better next year.

It’s an incredible feeling right now and to win today was a huge Team effort. It was a crazy race with a lot of action and fighting but luckily we always had the pace to counter back and overtake Mercedes in every scenario. It wasn’t easy out there but the Team made all the right calls, especially at the end to pit for the soft tyres during the Safety Car which gave us the win today. As a Team you always try and make everything perfect, I focus on my job and the Team also try to do a perfect job in the pits and on the strategy and clearly today it worked out pretty perfectly. It’s a great victory, after last year of course, but more for the way the race unfolded and how we all had to work together. Today and the whole weekend the car and Honda power unit have been working really well and we have made a step so thank you to everyone for that. It is of course a massive shame that Alex could not be on the podium with me as it would have been an even better result for the Team but it’s great for Pierre to be up here and for Toro Rosso and Honda.

This is just incredible! My first podium in Formula 1 and with Toro Rosso. I kept working every race on myself, I always thought that if I could be in the right place at the right time something will come, and today it happened, it’s just amazing - I have so many emotions! I’ve always said the team is my Italian family, I love their spirit and passion, they always push like hell and today was the best present I could give back to thank them for their massive constant effort. You dream a lot about being in F1, you dream about your first podium, but then when it happens all of the emotions coming through me are just unpredictable, it’s just the best day of my life right now. I want to send a huge thank you to everyone who has supported me since the start of my career and have gotten me to where I am today.

Of course I’m frustrated but I’m not angry, I’m just upset. I wanted that podium and we deserved it as it was on merit. At the Safety Car restart we had some fun and I enjoyed battling with the Ferraris, the overtake felt good! Obviously Lewis had good grip once he pitted and I think he would’ve got me eventually into Turn 1, but I thought worst case scenario we had P3. I had a good gap to Lewis and I wasn’t worrying about him. I went into the corner deep just to cover him so he didn’t get any ideas, and then there’s a blind spot and obviously we made contact. Of course he didn’t do it on purpose, it’s just one of those things and today wasn’t meant to be. It’s done now and we’ll focus on the positives before the next race. Congratulations also to Max, he drove really well and deserved the win.

Starting from P16 I knew it wasn’t going to be easy today. There not much to say, it was a difficult race until my safety car restart on the last lap, as I was able to overtake three cars, getting at least one point. It’s the second podium for Toro Rosso this year and I think we are the only midfield team who achieved that, so we can be really pleased with our effort. We scored many points today, taking back the sixth position in the Championship. Today’s result is a great achievement for the team. 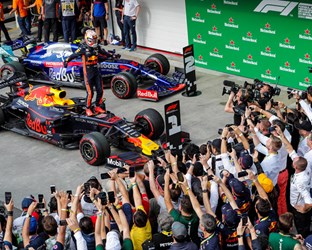