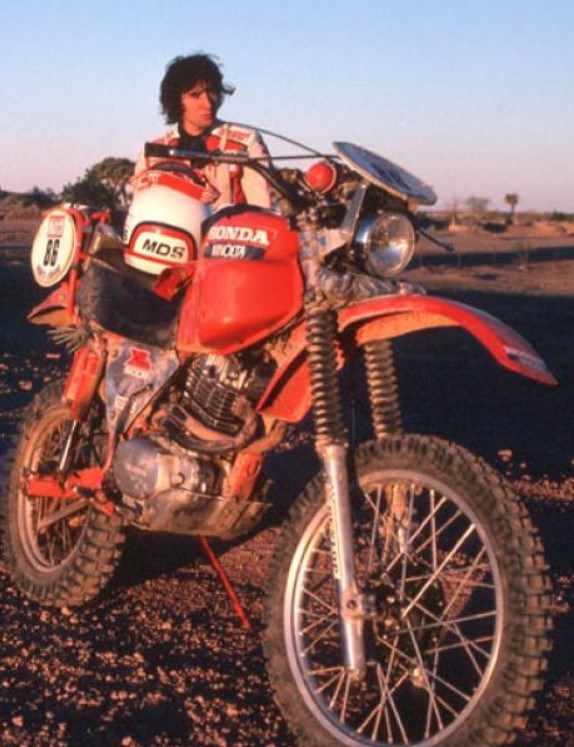 The words with which Thierry Sabine sent the participants to the first Paris-Dakar rallye over forty years ago became historic. In record time the desert race developed into one of the most fascinating and popular motorsport events worldwide. Honda also wrote a big part of the history of this legendary desert rally over the next few decades.

It was a quiet start when a total of 90 motorcycles, 80 cars and 12 trucks headed on December, 26th 1978 on Place Trocadéro in front of the Eiffel Tower for the very first Paris-Dakar rallye. The motorcycles of the rally pioneers had little more than two wheels in common with today's highly specialised rally bikes. Just 35hp single-cylinder engines were fitted in simple scrambler frames. Mostly self-built, large tanks upgraded the bikes for the long distances. But Thierry Sabine was right: The TV broadcasts of the Paris-Dakar immediately fascinated an entire generation of motorcyclists and made them dream of an adventure in Africa. The Dakar winners became heroes, their motorcycles iconic.

In 1981 Honda grabbed this opportunity and hired the winner of the first two Dakar editions, the then 24-year-old Frenchman Cyril Neveu, for the 1981 Dakar. But the kick-off for the young rally star turned into a challenge too great. During the prologue, which took place outside Neveu's home town of Orléans, the chain of the XLS 500 broke just 30 metres from the start line. It took 25 minutes to fix it. After that, Neveu did not manage a single stage victory and finished the rally in 25th position. The potential of the bike was proven by his teammates (Vassard, Desheulles, Rigoni), who won four stages in total.

For the 1982 Dakar, not the French importer, but Honda Racing Corporation (HRC) took over the preparation of the Dakar bikes. The displacement of the single cylinder was increased to 550cc, the power output raised to 45hp. Because the transmission remained limited to four gears, the clutch was also strengthened for better durability. The tank capacity was increased from 32 to 42 litres. But the big step ahead was the new chassis where a monoshock with Pro-Link linkage replaced the two shock absorbers of the XLS 500. With the progressively working suspension and more than twice as much suspension travel as the 1981 model, the desert racer had considerably more potential on the fast parts of the tracks and more reserves with a full tank. The success proved HRC's commitment right. Neveu handed Honda its first Dakar victory with the XL550R, and team mate Philippe Vassard finished second.

Nevertheless, the singles lost more and more ground against the two-cylinder machines on the fast stages in Africa. With a top speed of around 160 km/h the single cylinders lost a lot of time compared to the 180 km/h of the two-cylinder bikes. It was too great a disadvantage for their more agile handling to compensate, and in the following years the XL550R only managed a single podium finish (3rd place, Vassard 1984) at the Dakar.

Again it was obvious that the route to victory could only be found through a completely newly-designed motorcycle. The Honda NXR750 was developed for the 1986 Dakar. Under the huge 57 litre tank, there was a brand new prototype V2 engine with ohc valve train, 779 cc displacement and max power of 70hp. With a full tank the NXR weighed about 250 kilograms. But only the factory riders knew at that time: In terms of rideability and handling, the NXR was far ahead of the competition. Neveu proved this at the first try. The potential of the bike allowed him to cleverly plan the race and minimize the risk. After 15,000 kilometres, the longest Dakar in history, the Frenchman clinched the top step of the podium for Honda again. It was the first of four consecutive Dakar victories for the NXR. After Neveu's 1987 victory, Italian Edi Orioli (1988) and Frenchman Gilles Lalay (1989) took the top spots with this dominating twin cylinder. No manufacturer had ever before written such a success story at the Dakar, and the NXR was immortalised in the sport.

The NXR had fulfilled its role as a pioneer, but just as one legend stepped aside, another was waiting in the wings. In 1988 the Africa Twin (650cc, 49hp) was introduced and was enthusiastically accepted by the customers. To prove that this trail bike not only shared the looks of the NXR but also the potent performance, the French Honda importer started an initiative at the 1989 Dakar. Under the slogan "50 Africa Twin à Dakar" privateers were offered an opportunity to participate in the rally on only mildly-modified Africa Twins (two 8-litre rear tanks, rebuild suspension). A remarkable 18 amateur riders reached the finish line. The Africa Twin promotion continued for the next two years and in 1991 Italian Roberto Boano even grabbed 11th place in the overall classification on one of the red, white and blue bikes.

Despite this success, Honda did not return to the rally until 1995. For this time the target was not to win, but to showcase new technology, the EXP-2. The experimental bike sported a 402cc two-stroke engine, which turned into a self-igniter under certain load conditions. The part-time diesel performed excellently, celebrated a sensational fifth place overall with French rider Jean Brucy – and disappeared after the rally as quickly as it had entered the stage. The project was no longer pursued, and Honda entered a break from the Dakar.

After 24 years since the Africa Twin name entered the Dakar in 1989, Honda returned to the great race. Continuing the legend, the target was to prepare the field for the next Africa Twin, which was to be presented in 2016. But meanwhile rallye racing had changed a lot. Twin cylinder engines were banned in 2005, the rally moved to South America for the 2009 edition and in 2011 the displacement was limited to 450cc. So it was understandable that the CRF450X offroad bike served as a base for Honda's comeback at the 2013 Dakar. The engine with the Unicam valve train (the intake valves are directly actuated by the camshaft, the exhaust valves are activated by a rocker arm) was compact, and was designed for punch at low revs instead of revving freely in deep sands and fast straights. As the Dakar continued to prove why it is the toughest rally on earth, the best Honda rider was Portuguese Hélder Rodrigues who took 7th place on the CRF450 Rally but the groundwork was set.

Again, history repeated itself. HRC recognised that for a win in such demanding competition, a new motorcycle had to be designed. Technically, the 2014 CRF450 Rally had not much in common with its predecessor. The Unicam concept, which had been used on all Honda offroad race bikes up to then was replaced by a dohc valve train (double overhead camshafts). The high revving single engine achieved a peak power of over 60hp. The chassis was also extensively modified. The conventional rear frame was replaced by a slim carbon monocoque and the front tanks were also narrower in the lower area. Both of these modifications provided the rider with greater freedom of movement and improved the handling. A longer wheelbase provided more straightline stability for the increased top speed of over 175 km/h. However, the traction control system was completely new on rally bikes. If the rear wheel spun too much, the motor management reduced the power by fuel injection and ignition. This helped to avoid peaks in engine revs and protect the tyres. Especially on marathon stages, where the tyres have to survive two stages and repairs can only be carried out with on-board tools, this was a great advantage. Compared to the previous version, the CRF450 Rally was 10kg lighter, weighing 170kg with full tank. But when it was launched in South America, luck was not with the brave. The newly engaged star rider Joan Barreda got the record number of 5 stage victories, but paid for it with frequent crashes. Once again Hélder Rodrigues became best Honda rider with fifth place.

2015 - Electronics for the rally bike

For the 2015 Dakar, the CRF450 Rally was again upgraded. Instead of a conventional throttle cable, the throttle valves were now electronically controlled by a ride-by-wire throttle grip. As a result, the traction control reacted even more sensitively and fuel consumption was reduced. Honda found themselves with a big advantage over their competitors in engine power on high-altitude stages, such as in Bolivia. This time the plan seemed to work out. Barreda led the rally until the flooded salt desert of Uyuni in Bolivia turned the tide. Salt water infiltrated the electronics of Barreda's bike and the Spaniard had to be towed to the finish line. The dream of victory was tantalisingly close but again the Dakar bit. Team mate Gonçalves finished second in the final standings though, with echoes of what was so nearly a 1982 double-podium repeat.

The development of the CRF450 Rally did not stop. After semi-active suspension elements had already been introduced on road bikes, HRC adapted the new technology to some of the four CRF rally bikes before the 2016 Dakar. Initially, damping could only be adjusted manually, but later the technicians used suspension components which adapted automatically to the terrain. For the 2018 Dakar the Honda factory bikes no longer used electronic suspension, but this technology now has filtered to the Africa Twin for the benefit of customers – just one example of how racing directly helps improve production machines.

In general, the red riders in recent times had lacked the luck to match their stage-winning pace. Despite many stage wins, the myriad challenges of the Dakar had proved too much and thwarted such promise. In 2019 the victory of Californian Ricky Brabec seemed within reach, as it had for Barreda in 2015. The desert specialist was leading, but three days before the finish, his challenge came to an early end the in the loose Fesh Fesh sand of Peru. Once again fate was no friend of the brand with the wing, but the taste of victory was there.

At the Dakar 2020 luck turned around. In the deserts of Saudi Arabia the 28-year-old Brabec took the lead on day three and defended his leading position with aplomb over the total distance of 7800 kilometres. After seven attempts at the world’s most gruelling rally, the puzzle parts finally did fit together. The Honda team returned to the spot they had first climbed in 1982 at the Lac Rose in Dakar. To the top step of the podium. 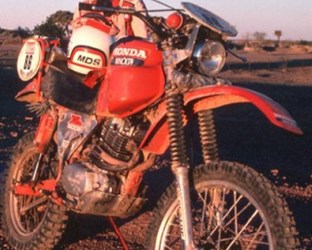