First F1 Victory For Gasly At The Italian Grand Prix 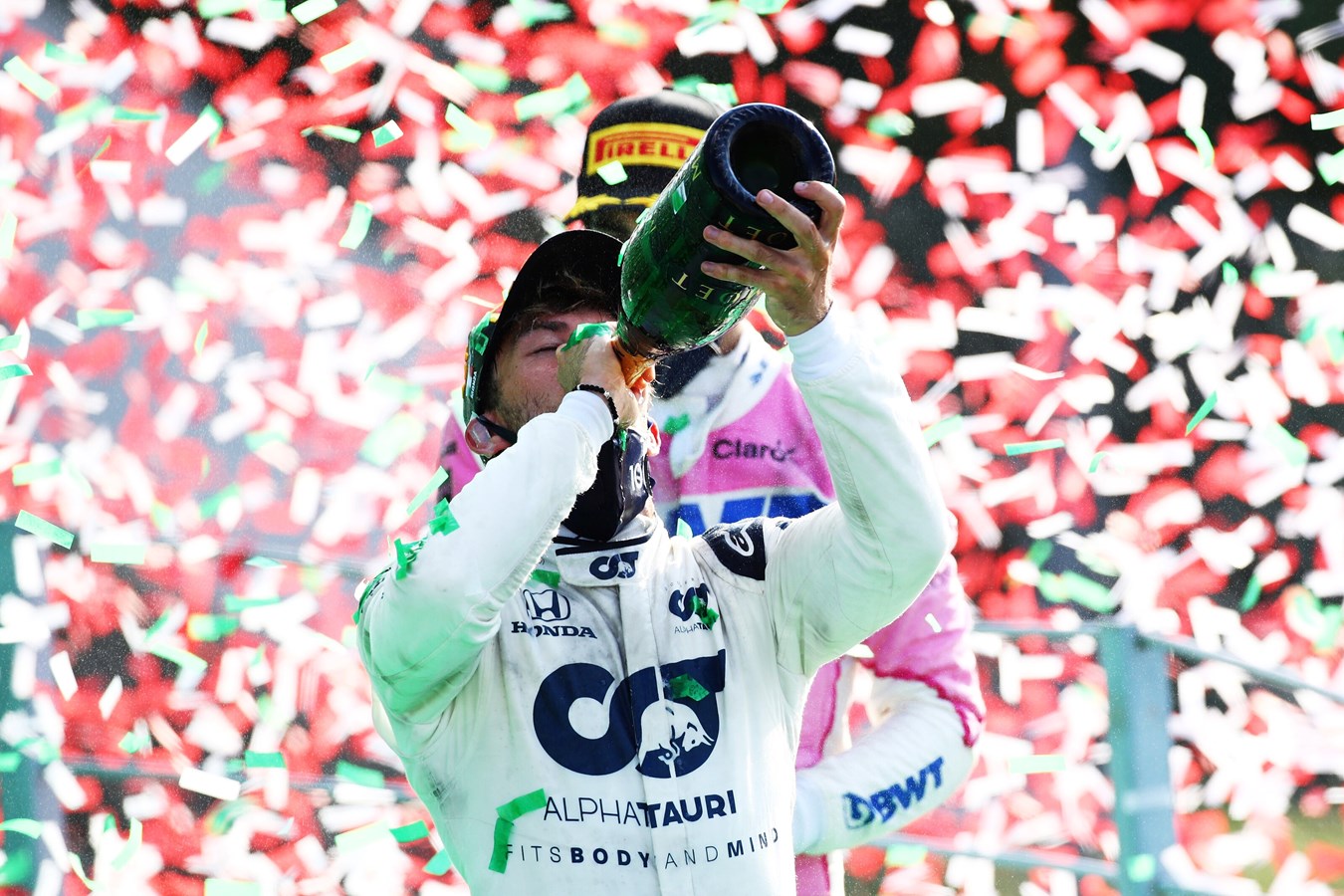 Scuderia Alpha Tauri driver Pierre Gasly took an astonishing maiden Formula 1 victory in a dramatic Italian Grand Prix, leading the second half of the race and withstanding incredible pressure at Monza. The icing on the cake came from the fact the victory came at his team’s home race and also its fiftieth Grand Prix in partnership with Honda.

The win is also very significant as it is the first time that victory has gone to a team outside what is considered the “top three” since the start of the hybrid era of Formula 1 in 2014.

Another interesting stat is that, thanks to the four wins Honda has taken over the past two years with Aston Martin Red Bull Racing, Honda is therefore also the only PU manufacturer to have powered two different teams to victory in the hybrid era.

The race got off to a relatively normal start, with Max slotting into seventh after a fight with Lance Stroll in the opening laps and putting pressure on Valtteri Bottas ahead. Further back, Pierre ran tenth and Daniil 11th, while Alex was unfortunate after light contact with Pierre at Turn 1 saw him run wide and drop back in the field.

Daniil had started on hard tyres compared to softs for the other three cars and was well placed in 11th early on, as the opening laps saw Alex overtake Charles Leclerc when he started his fightback.

Scuderia AlphaTauri then pulled off an excellent bit of anticipation strategy by bringing Pierre in for hard tyres when Kevin Magnussen stopped on track, pitting and rejoining before a Safety Car period that saw the pit lane closed for a spell due to the position of the Haas. That move promoted Pierre to third on the road once the rest of the field was able to stop - including Max, Daniil and Alex - but the race was soon halted altogether and turned completely on its head.

Leclerc had a big crash at the halfway point, thankfully emerging uninjured from his Ferrari but with the incident causing a red flag as the barrier at the final corner needed repairing. Teams were allowed to change tyres at this point, with Pierre in third switching to new medium tyres on what was officially lap 26, while Max and Daniil took used mediums and Alex went for hards.

The race was restarted with a standing start and Pierre immediately jumped Stroll off the line to take second place, which became the lead as Lewis Hamilton came into the pits to take a penalty - for pitting when the pit lane was closed - at the end of that lap.

With 26 laps remaining, Pierre pulled away at the front while Max sadly had to retire as we spotted an issue on the power unit. With Alex carrying damage, he was caught in traffic and unable to make progress back into the points, but Daniil was fighting in the top ten.

At the front, Pierre had pulled out a gap but saw Carlos Sainz closing in over the final 15 laps, eventually getting into DRS range. But Pierre judged his race perfectly, making no mistakes under immense pressure and crossing the line 0.4s clear to take an emotional first F1 victory, and our first with AlphaTauri.

Daniil continued his battling drive to the flag and finished ninth to add another two points to his total, while Alex was limited to 15th at the back of a queue of cars as Aston Martin Red Bull Racing estimated he was losing a second per lap in performance due to damage.

"A fantastic win today for Pierre Gasly and Scuderia AlphaTauri and it’s particularly special that we can celebrate this moment together after what was the 50th race in our partnership. It was an extra bonus to get the win at AlphaTauri’s home race. Pierre’s drive was fast and consistent and the team strategy worked perfectly, as did our PU. Combined with everyone’s efforts this delivered a great result. Congratulations to Pierre especially for his first ever F1 win, but also to everyone in the team. Honda is proud of our partnership which has got stronger step by step over the two and a half years we have been together. We hope our fans around the world enjoyed this afternoon as much as we did it and we thank them for their constant support. This was also the first race with the new PU mode restrictions and we have learned a lot over the three days at the track. Now we have plenty of data to prepare for the race in Mugello next week. Even though we won, it has been a tough weekend, especially as we had a PU issue in the race on Max’s car. We will look into the cause immediately and hope that we can have another strong race next week with all four cars."

"This is amazing! I’m lost for words! It’s unbelievable! I’ve been through so many things in the past 18 months and it’s better than anything I expected. I focused hard when I re-joined Scuderia AlphaTauri. Day by day, race by race, we improved ourselves and got stronger and stronger – this team gave me my first podium in F1 last year in Brazil and today, these guys gave me my first win in Formula 1, in Italy, in Monza, with an Italian team. I’m not someone who gives up on anything, I always fought for everything in my life until I made it to F1. Today it was a great day! When I was fighting the last few laps to keep P1, I knew how gutted I would have been if I had lost it, I wouldn’t have been happy with P2. I gave it everything I had - it was difficult - I pushed hard at the start of the stint to not give anyone the slipstream behind, then the last five laps were so intense, I almost shunted 10 times… I was pushing so hard! My tyres were gone but I wanted that win so much, it still feels weird to say I’m an F1 race winner. A big thanks to all of these guys here at the track and at the factory, in Faenza and Bicester, it’s a great day for them too. Most of them are Italian and the HQ is in Faenza, Italy, so to win the Italian Grand Prix is amazing. Thank you all."

"It was a very eventful race. I’m very happy for Pierre, congratulations to him and to the team, it’s a great day for us. Looking at my race, P9 was the maximum we could achieve today with the timing of the safety car and the tyre choice we went for at the start of the race. Everything that could have gone wrong with the strategy, unfortunately did, but at least it was the opposite for Pierre. It was amazing for him to take the opportunity and I’m happy for him. I’m disappointed not to have had the same opportunity but I’m satisfied with my race, I’m honest with myself and I think I drove a good race."

"That wasn’t a fun race and P15 clearly isn’t reflective of our true package. We had a lot of damage with the left side of the floor missing after contact in Turn 1 and then with the time penalty our race was basically over. We had no grip and lost a load of downforce so it was a long race where we were just limping to the end. It’s been a tough weekend for us as a Team which we thought it could be and then with the circumstances today it’s just made it a lot harder. It’s obviously a much better day for AlphaTauri so we’re happy for those guys but for us, we need to put our heads down and focus on Mugello in a week’s time."

"I think pretty much everything that could go wrong today did go wrong. I had a very bad start with a lot of wheel spin when I dropped the clutch and from there onwards I was stuck in a DRS train which makes it almost impossible to overtake around here. After the red flag I had a problem with the engine at the re-start which we tried to solve but it didn’t go away and we had to retire the car which is of course very disappointing. Now we just have to forget this race and move on to next week at a new circuit we are all excited to visit. It may not have been our weekend but I am very happy for Pierre as AlphaTauri have been very fast all weekend and to win here in Italy is very emotional and a great result for them. They are a great group of people and I hope they are going to enjoy this one tonight because they all deserve it." 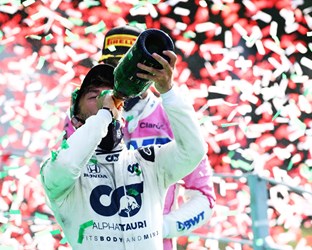