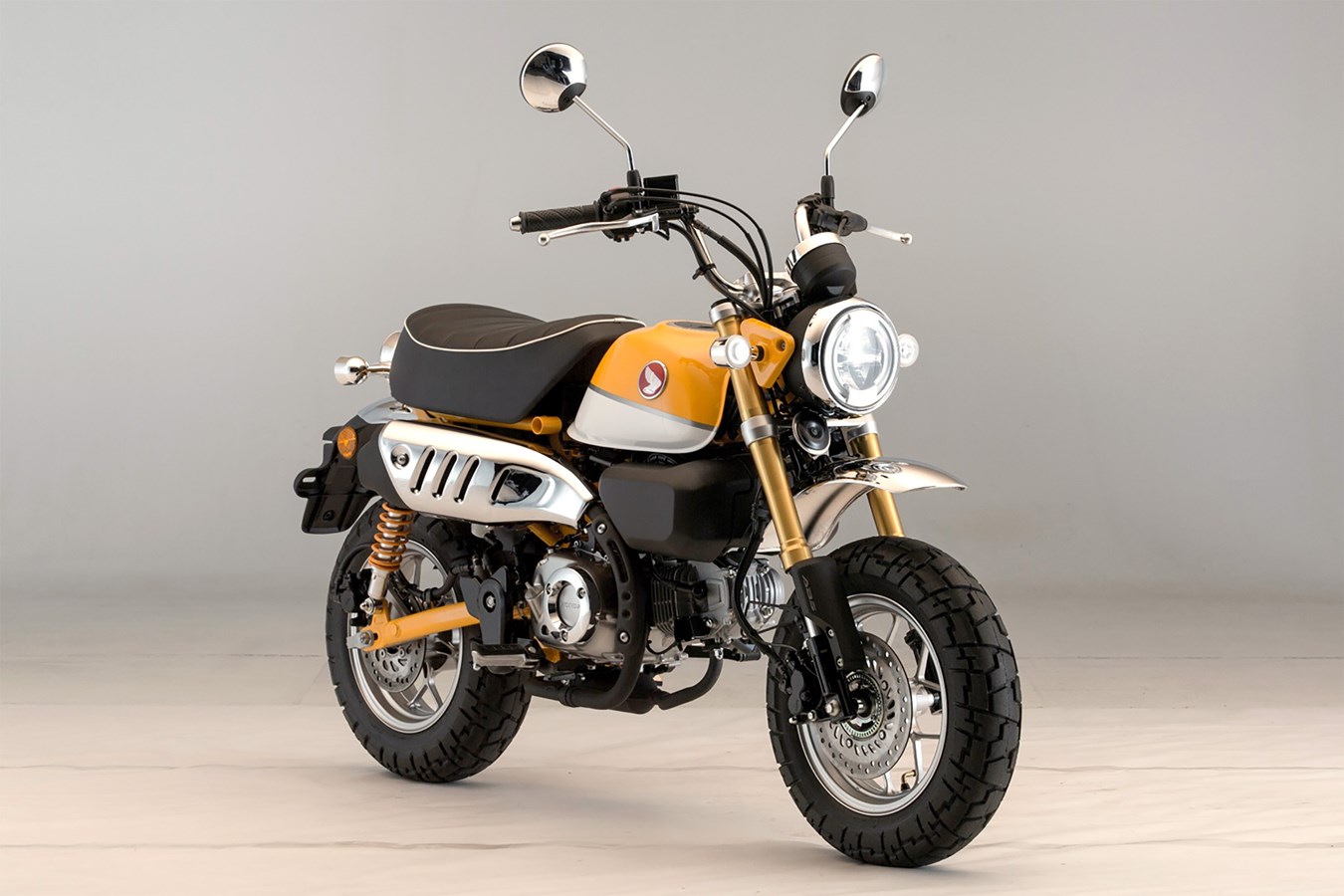 Its popularity was based on a cute, instantly-likable design, tiny dimensions and ultra light weight - which made it a whole load of fun around town. By 1969 its wheels had increased to 8-inch in diameter and from 1970 it gained even greater popularity, when the addition of quick-detach forks meant it would fit into the trunk of a small car.

By 1978 – a point that marked the start of real prime time for the Monkey – the machine had been re-styled with a teardrop style fuel tank, and became hugely popular with legions of RV (Recreational Vehicle) drivers in need of convenient transport to use once they were parked up. And this is where and when the cheeky Monkey really cemented its place in millions of hearts; with its 3-speed gearbox and centrifugal clutch (which needed no ‘traditional’ motorcycle skill to operate) it gave thousands of riders their first experience of twisting the throttle on a powered two wheeler.

After the modern-day success of the sharp-suited MSX125, which proved the desire for a funky, pocket-sized town run-around, it was time for the Monkey name to return, reborn and ready for life in the 21st century city.

Naturally the classic Monkey style had to provide the cues for the new model. A trapezoid silhouette highlights the compact length, while adding depth and substance to its stance. Simple, curved surfaces are designed independently of each other and feature throughout.

Modern technology is fully present within the evocative reincarnation of the classic look: a digital full-LCD circular meter features speedometer (which winks playfully when the ignition is turned on), odometer with two trip meters and six-segment fuel level indicator; all lighting is LED; the ‘wave’ pattern key (which also wears the Old Wing motif) features an ‘answer back’ system that makes the lights flash at the push of a button to allow easy location in crowded car parks; the single channel ABS system operates with an IMU to mitigate rear ‘lift’ under strong braking.

As for the power unit, true to its origins, the Monkey’s horizontal SOHC 125cc single-cylinder engine is simple, robust and tuned to deliver useful about-town performance. Air-cooled, with bore and stroke of 52.4 x 57.9mm and compression ratio of 9.3:1, fed by PGM-FI, it produces 6.9kW @ 7,000rpm and 11Nm @ 5,250rpm. The gearbox is 4-speed and the engine returns fuel economy of 189 mpg (WMTC mode).

The Monkey’s steel backbone frame has been tuned for a suitable balance between rigidity and supple feel – perfect for the wide variety of conditions the machine is sure to be ridden in. Oval in cross-section, the swingarm echoes the circular design theme that runs through the bike.

Wheelbase is set at 1155mm, with rake and trail of 25°/82mm and a minimum turning radius of just 1.9m. Wet weight is a mere 107kg, with a seat height of 775mm. The plush seat is made of high-density urethane for maximum comfort.

The 2018 Monkey 125 will be available in three colour schemes:

First model – made for use at amusement parks, with 5 inch wheels, rigid suspension, foldable handlebars and 3.1kW 49cc engine.

#Please note that the figures provided are results obtained by Honda under standardised testing conditions prescribed by WMTC. Tests are conducted on a rolling road using a standard version of the vehicle with only one rider and no additional optional equipment. Actual fuel consumption may vary depending on how you ride, how you maintain your vehicle, weather, road conditions, tire pressure, installation of accessories, cargo, rider and passenger weight, and other factors. 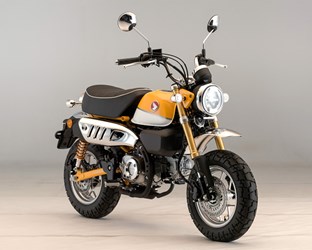