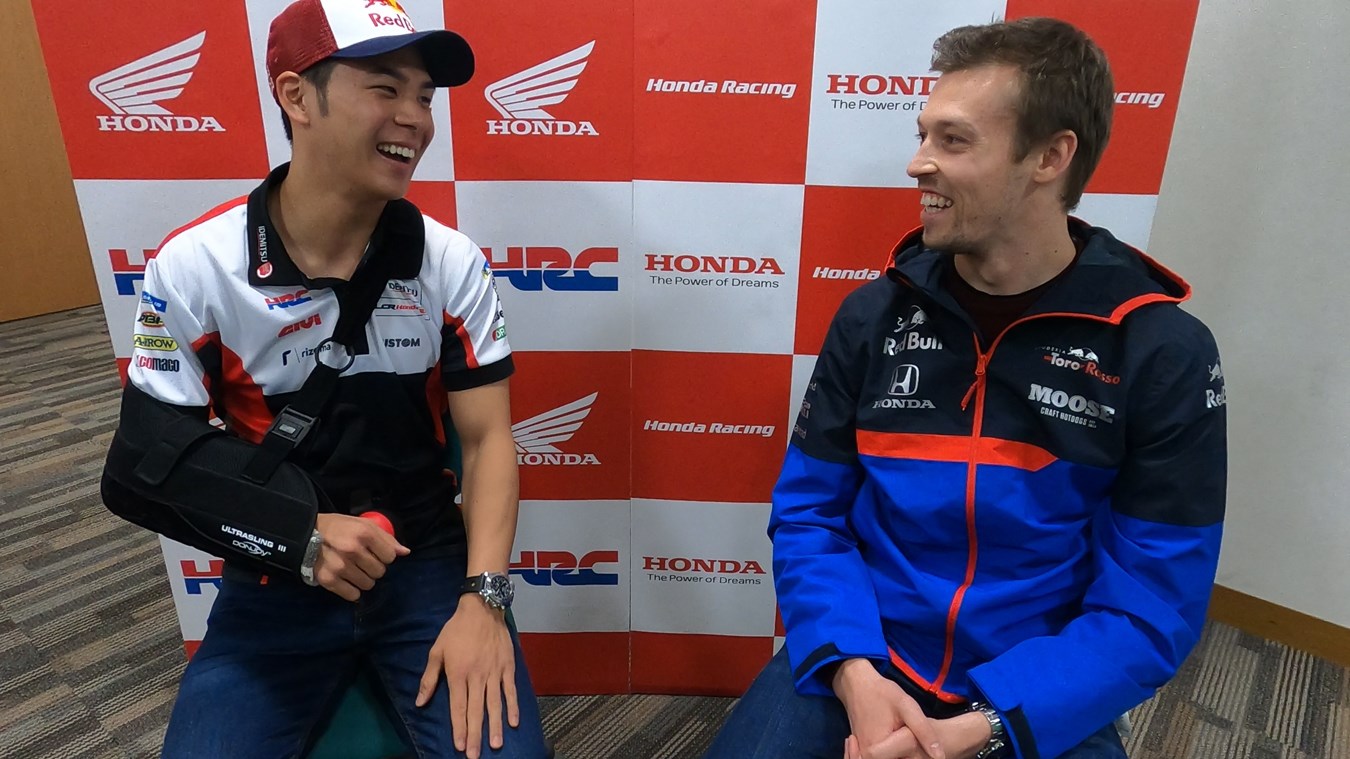 Formula 1 and MotoGP are the world’s two biggest motorsport championships. And most Formula 1 drivers are as fascinated by MotoGP as most MotoGP riders are fascinated by F1.

Although the differences between racing on four wheels and two wheels are huge, the ultimate goal is the same: to maximise speed and grip to minimise lap times and race times.

Thus Daniil Kvyat and Takaaki Nakagami had plenty to talk about when they got together for a chat during the Honda Racing Thanks Day at Twin Ring Motegi earlier this month.

“I like to watch MotoGP because there’s so much fighting – every lap there’s something happening,” said the 25-year-old Russian, who scored his first Honda-powered F1 podium at July’s German Grand Prix. “We are faster over a lap, but in terms of the difficulty of the task, what you guys do looks very crazy to us! And big respect to you MotoGP guys because you push so hard, even when you are injured. That’s incredible and must be so difficult.”

Kvyat does ride two wheels, when he’s at home in Monaco. “I have a scooter – it does 50km/h, downhill – it’s enough for me!” he laughs.

Nakagami is just as impressed by what Kvyat does in Formula 1.

“I always follow F1 – it’s very interesting,” said the LCR Honda IDEMITSU rider, currently recovering from surgery to fix a shoulder injury. “I watch the onboard camera shots and what I completely don’t understand is how you brake so late – nobody can do that on two wheels! Four wheels and two wheels are completely different because of the g-force and downforce.”

Unlike MotoGP bikes, Formula 1 cars are designed to create maximum downforce within the aerodynamics regulations to increase grip. This allows drivers to brake very late and corner very fast, experiencing more than 5g during braking and 6g during cornering. MotoGP riders experience about 1.7g on the brakes and through the corners.

No wonder F1 cars get around racetracks so much quicker. The two championships only share four venues (Barcelona, Red Bull Ring, Silverstone and Circuit of the Americas) but the story is always the same – F1 cars are around 30 percent quicker over a lap. At COTA, for example, the F1 lap record stands at 1m 36.169s, while the MotoGP lap record is 2m 04.277s.

Interestingly, however, MotoGP bikes are often faster on top speed, thanks to their lack of downforce. At COTA the quickest MotoGP bikes exceed 345km/h at the end of the American track’s 1km back straight, about 15km/h better than the fastest F1 cars. But F1 drivers get stopped for the next corner in 125 metres, while MotoGP riders take more than 200 metres to decelerate!

“But it’s not the speed or lap time that’s important – it’s what you take out of the given machine,” added Kvyat. “We have so much downforce and also four wheels, that’s why we can brake so much later and corner with so much more speed. But in MotoGP it’s easier to dive past someone, whereas in F1 we lose downforce when we get close to another car, so it’s really difficult to make a move.”

Aerodynamics have been a major part of F1 design for decades, with elaborate front and rear wings creating downforce. Winglets first appeared in MotoGP just a few years ago, to reduce wheelies as riders accelerate out of corners. But the amount downforce is tiny compared to F1, usually less than 20kg of load on the front tyre.

“We have a lot of horsepower in MotoGP,” said Nakagami, who next year will race his third season in MotoGP aboard a Honda RC213V. “So the bike wheelies and the front tyre doesn’t touch the ground – this is the main reason we have wings in MotoGP – to help keep the front on the ground.”

The 27-year-old Japanese and Kvyat were able to meet at the Honda Racing Thanks Day because Honda is the only company that contests F1 and MotoGP, as well as numerous other two- and four-wheel motorsports including IndyCar, World Superbikes, the World Touring Car Cup and the MXGP World Championship.

“The support I felt here and from Honda fans and also Suzuka was incredible – I’d like to thank the Japanese fans for the passion they bring to our sport,” said Kvyat during his first visit to the event.

Nakagami has been a regular at the Thanks Day for a while. His career has been powered by Honda since 2012 when he graduated to the Moto2 category, which gave him his first Grand Prix victories, in 2016 and 2017.

“This special event for the fans is really nice, because during race weekends it’s really difficult to talk with fans face to face because of the stress and because we are so focused on racing,” he said. “Here the fans can see our faces more relaxed and it’s really nice to be with all the four-wheel guys and the two-wheel guys.” 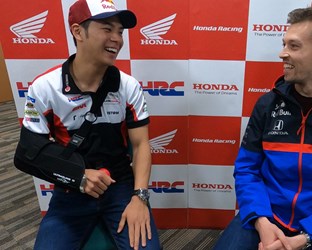