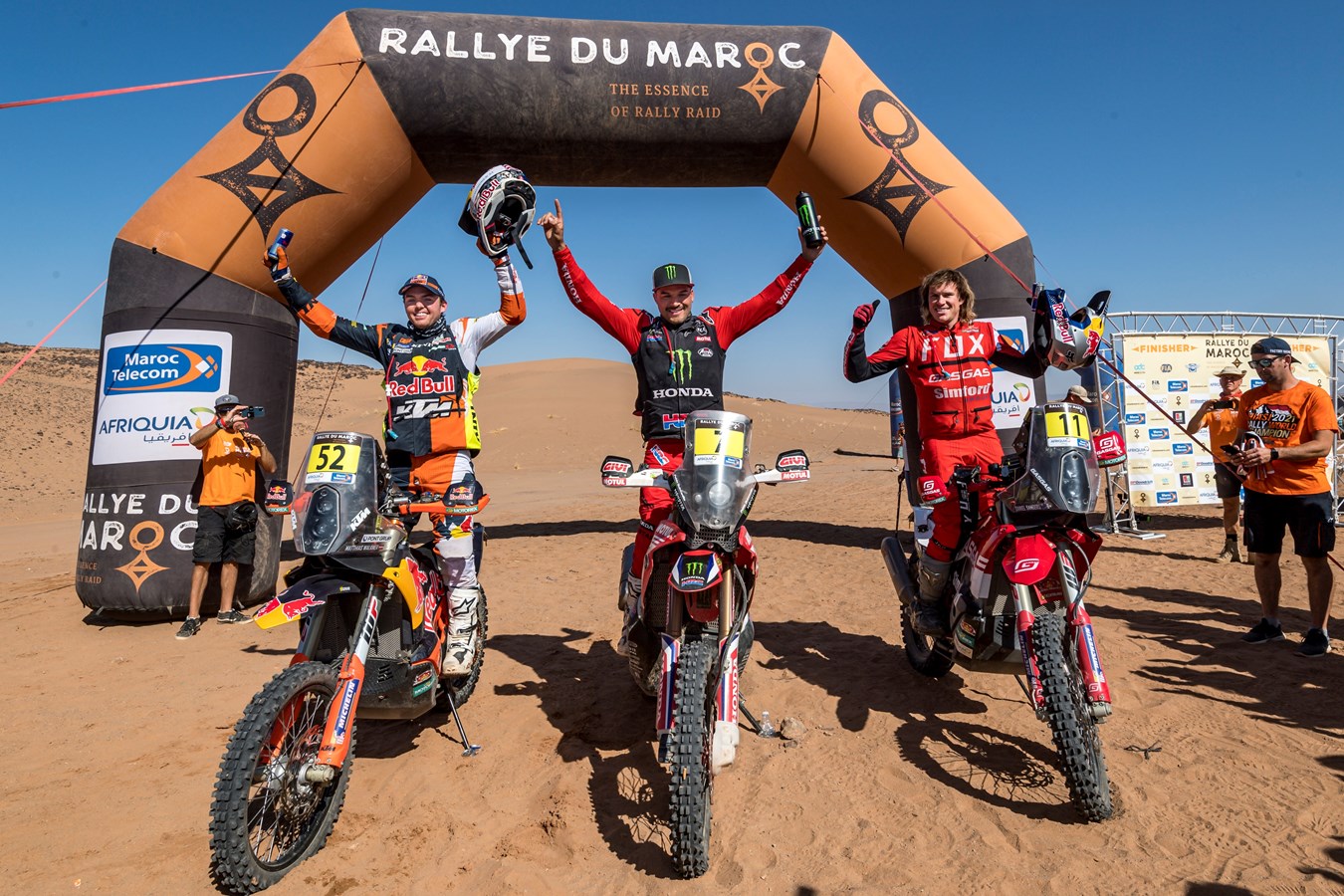 The Rallye du Maroc concludes with an excellent result for the Monster Energy Honda Team. On the final day of the rally Pablo Quintanilla saw off his rivals to claim both stage and race victories.

Monster Energy Honda Team has scooped an excellent result in the Rallye du Maroc. After only five months with his new outfit, Chilean rider Pablo Quintanilla clinched his first race victory aboard the Honda CRF450 RALLY. The occasion also marks Quintanilla’s maiden win in Morocco as he gets back to winning ways after the 2019 Atacama Rally. The team tally now lies at three stage wins in Morocco. Honda’s last win in Morocco was achieved by Paulo Gonçalves in the 2013 edition.

The team’s main aim in participating in this fourth race of the FIM Cross-Country Rally World Championship was to clock up as high a mileage as possible in the desert for its four riders ahead of Monster Energy Honda Team’s forthcoming participation in the Dakar Rally. The squad was able to confirm that both the high level of the riders and the Honda CRF450 RALLY bike performance continue along the positive trajectory of recent seasons.

The 166-kilometre final special stage went quickly for most of the riders still in contention for victory at this Rallye du Maroc. David Castera, race director, had designed a stage with very little navigation. With little movement of wind, the dust hanging in the air accompanied the riders throughout the journey, making it impossible for riders starting from the rear to make up time.

Pablo Quintanilla started in a fine position from which to attack Mathias Walkner’s lead. The Monster Energy Honda Team rider held a sufficiently strong pace to allow him to fulfil this main mission and capture the final stage of the Rallye du Maroc. Ricky Brabec was unable to whittle down the gap separating him from his rivals in the general standings and, in spite of finishing runner-up today, narrowly missed out on a podium place.

Joan Barreda was also able to battle his way to the finish, allowing him to go home with a sweet sensation. Sixth on the day and eleventh in the general standings, with the Spaniard highlighting the noteworthy teamwork carried out by the squad in recent days in Morocco. After yesterday’s fall, Chilean rider José Ignacio Cornejo went out today to complete the course, attempting to pull back as much as his physical condition would permit, but nevertheless citing good sensations on the bike. In the end, it was tenth overall place for the rider from Iquique.

The next event to feature Monster Energy Honda Team participation will be at the 2022 Dakar Rally, set to take place in Saudi Arabia from the 1-14th of January.

RICKY BRABEC - STAGE: 2nd FINAL STANDINGS: 4th
I'm happy to finish another rally, it's been good training for the Dakar. I'm also very excited for the Honda team to be on top of the podium. Unfortunately, we couldn't have two Honda riders on the final podium. It takes a lot of guts to win a stage and it takes a lot of courage to open a stage: only three riders have opened this rally, and I think we opened the most difficult stages. I'm really looking forward to the Dakar and this was just training. I made a couple of mistakes and missed out on the podium on the last day, but at least we'll get home safe and sound and get back to training to be ready for the Dakar.

I'm happy to finish another Rally du Maroc, which is always very hard and demanding. The overall result is not what I would have liked, but we are happy because we kept a good pace and the bike was fantastic. The whole team is working very committed to this project and you can see a very important solidity in the team. It's positive as training for the Dakar. Today I was able to go faster than yesterday and that's good to reach the usual race pace.

I am very happy with the victory. It was a very difficult week and I want to thank the whole team for the great job    they did. It was fantastic for us. Personally, I felt very comfortable, I was riding with great pace, with good navigation and that's very good for my confidence. I am also very motivated for the next objective, which is the Dakar. We are going to take a short break, rest, recharge our batteries and then we will concentrate on the Dakar.

JOAN BARREDA - STAGE: 6th FINAL STANDINGS: 11th
I'm happy with the pace we've shown all week here in Morocco. The truth is that the times have been very tight. It's also true that in the end it's a race that is decided on small details. But let's keep the positives: the pace, getting back to the desert, being able to cover a lot of kilometres... to be able to get to the Dakar, which is our goal.
RUBEN FARIA - General Manager
The Rally du Maroc ended with a very easy final stage. When we started this rally we knew it would be very tough. We were counting on this last stage to be decisive, but everything changed with the shortened route: no dunes and a lot of dust on the track. Whoever started behind had no chance. Pablo had it in his head that he had to attack to win the race. In the end, it went as planned and he finished first in the final standings. We wanted Ricky on the podium, but with the change of the stage we saw that it was impossible and in the end he finished fourth. Nacho Cornejo crashed yesterday and ended up finishing tenth. It doesn't describe the good race he had ridden until yesterday, but he managed to finish the rally, which was the main objective. Joan had a good rally, I think he was the strongest rider in the rally, but he made a navigation error in the third stage and, with the penalty, he paid dearly, finishing eleventh. To wrap up, I would just like to emphasise that this was a race that we didn't have to win, but it was a way of bringing everyone together: riders, bikes and team. We wanted to finish the rally with all the riders, we didn't want any crashes, we just wanted to work on the navigation. That's why we leave here very happy, with the team and with the bike. Now we are going to focus on working, working and getting to the Dakar and trying to win it for the third year in a row.
6 Related Media 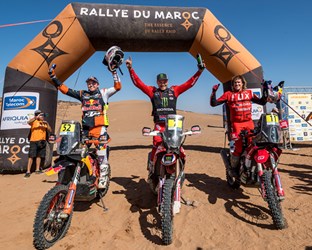