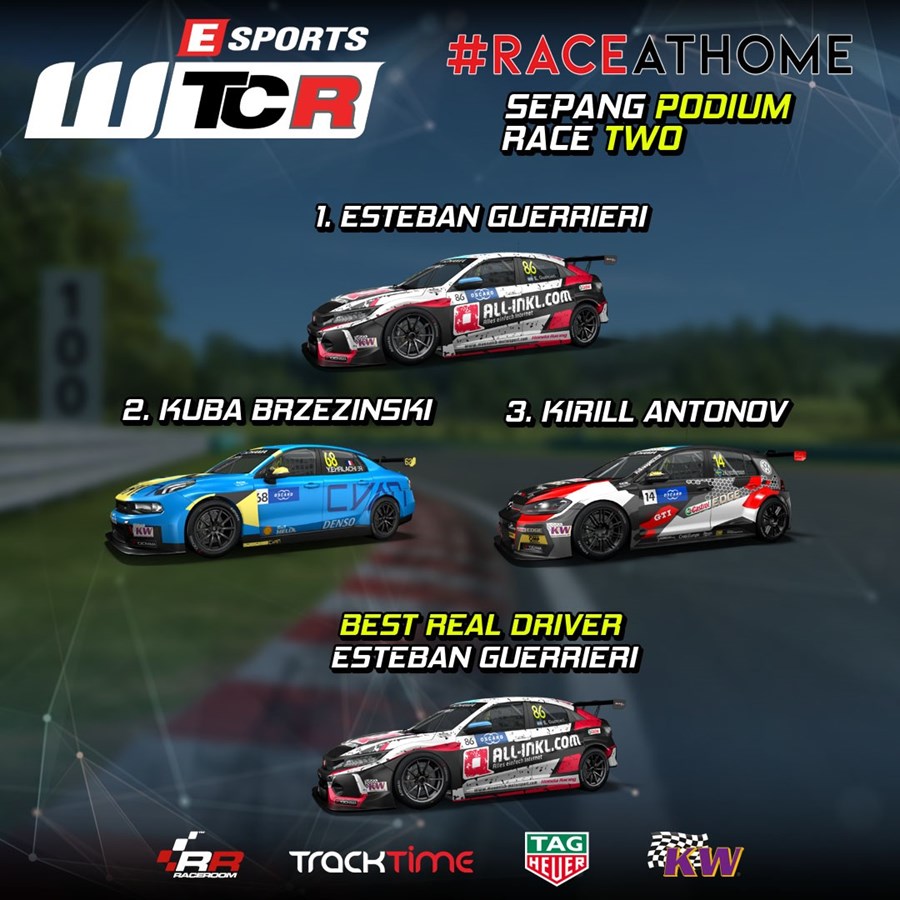 At the scene - virtually - of his controversial defeat in the 2019 WTCR title fight, Esteban scored a lights-to-flag victory in the Esports series finale to become the first real-life WTCR driver to win a contest on RaceRoom, the platform used in the Esports WTCR series.

Starting from pole on the partially reversed race-two grid - his reward for a 10th-place finish in the first race, which was won by the Honda Civic Type R TCR of sim racer Bence Banki - Esteban held his lead on the run to the first corner, then survived a tap from behind through the double hairpins.

The Argentinian quickly broke away, as the sim racing elite behind him squabbled for position and tripped over one another, and kept his rhythm up to maintain a gap back to his nearest rival over the remainder of the 25-minute race, eventually winning by just over a second.

Victory marked retribution on two counts for Esteban - who, in addition to finishing second in the 2019 WTCR standings, was denied a first Esports win a fortnight ago when he was hit from behind on the final lap of race two at the virtual version of Ningbo.

The 25 points he scored for the win, plus the six earned for his 10th-place finish in race one, ensured the Civic Type R TCR driver finished seventh overall among a highly competitive field of professional Esports racers.

There were strong results as well for Esteban's fellow real-life Honda racers. His 2019 ALL-INKL.COM Münnich Motorsport team-mate Nestor Girolami was convinced being back in his regular simulator would provide a boost, having returned to Spain from Argentina in the week prior to the Esports WTCR contest.

He soon proved his confidence was not misplaced, qualifying 17th and within half a second of pole, before making up one position in race one as he finished just shy of the points.

Nestor saved his best for last, though, making a blistering start to the finale to run inside the top 10. Despite briefly dropping to 12th, he was then promoted one position in the order when a rival served a drive-through penalty, and picked off two sim racers in the second half of the race to finish a fine ninth - scoring his first points in the process.

Attila Tassi was short of practice time immediately prior to the Sepang races and started race one 28th on the grid, but carved his way through the field in race one and made up seven positions to finish 21st.

He pulled off another impressive rise in race two by passing three cars at the start, and fought his way up into the points-scoring positions in the second half of the race, before eventually finishing just outside them in 16th. That nevertheless marked his best finish in the mini-series.

Attila's placing also ensured the Honda trio locked out the top three among the real-life WTCR competitors in race two.

That brought a fitting end to their participation in a series in which the drivers delivered on their pre-competition promise to entertain, and comprehensively exceeded on-track expectations against their sim racing rivals.

Having missed the Ningbo round, Tiago Monteiro was also unable to contest the Sepang Esports races.

Esteban Guerrieri said: "A very nice evening! It was important to get a good qualifying result, and in race one I just tried to stay in the top 10 for the reversed grid. In race two, as soon as I made a small gap I concentrated 100% on keeping a high pace, tried not to miss any braking points or any apexes and not to let the guy behind get my draft. It was intense, and there was a lot of pressure to hit lap after lap at a good pace. I'm very happy to finally get the victory - it was so close in the previous event - and, on top of that, that it happened at Sepang, where we had this bittersweet feeling last year. This is a little bit of a gift to the team and to Honda for what we missed last year. It's different, and it's not the real thing, but what I put in, the effort and dedication, and the spirit of the battle, this is real. So, even though my mechanics or Honda aren't here with me, I wanted to share this with them. It was good fun and a good show, so thanks to WTCR for putting this together."

Nestor Girolami said: "This was by far the best round I've had during this period. I was training quite a lot; unfortunately I couldn't do the perfect lap in qualifying, but anyway I started 17th and I finished 16th in the first race. In race two I had a very good first lap, because I overtook four or five guys in front of me - and that paved the way for a really good result too. I'm really happy with that! Congratulations as well to Esteban for his perfect work and his victory. He did a very good lap behind me in qualifying and he deserved a win."

Attila Tassi said: "It was two good races - the best of the four rounds - but in qualifying I had some bad luck and I couldn't put a lap time together, so I was left fighting up from 28th. I finished race one in 21st so I started race two in that position, and then I improved to 16th. It was progressive, and I managed some good overtakes and some good racing, but still there was some unsporting contact from others in my opinion. But it was great fun, for sure, and that was the main reason why we were racing. I enjoyed it - it was a good way to finish!" 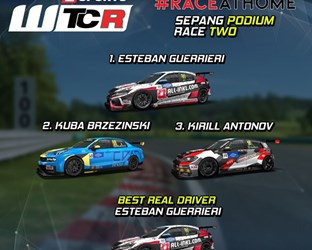