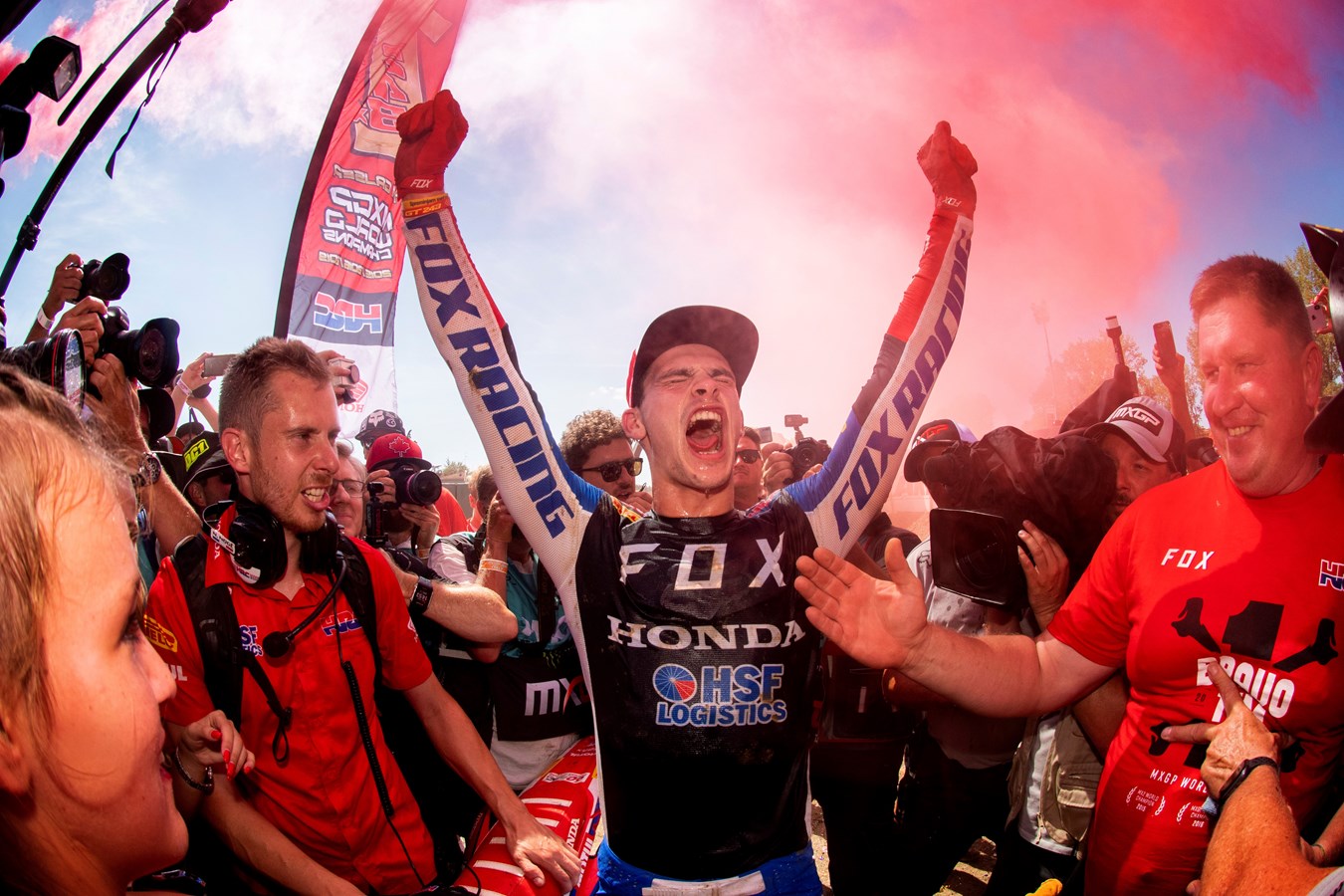 Needing just 13 points from the first race, Gajser looked to challenge for the win before settling for fifth place on the tricky Imola track, which hosted this MXGP of Italy. As he crossed the line, he knew that the championship was won and he then enjoyed the moment with the rest of Team HRC as they all celebrated another MXGP success, to follow on from the 2016 victory which marked Gajser’s rookie season on the Honda CRF450RW.

With the pressure of the championship off his shoulders for race two, the Slovenian rider was able to rider a bit freer and after a great battle with the rider currently in second in the championship, he was able to get the upper hand and come home in second place and finish third on the day. While he would have loved to have won the overall, the bigger picture was the championship and large number of travelling Slovenian fans made sure he fully enjoyed the moment as he took the gold plate on the podium. Numerous buses of fans made the trip across the border to cheer on their hero and as always Gajser returned the favour by celebrating with as many of them as possible, showing once again that he is a champion on and off the track.

In a season filled with records, Gajser continued his podium streak which now stands at 10 and with three rounds left, he can still become the joint most successful Honda rider in world championship history if were to win those remaining rounds.

Next up is Sweden at the beautiful Uddevalla facility in one week’s time where the Gajser will once again try to put his Honda on the top step of the podium and as he confirms his status as the 2019 MXGP world champion.

Unfortunately Brian Bogers’ weekend came to an early finish as a crash caused by another rider in the first few laps of the second moto left the Dutch rider with a damaged shoulder. He will now get it assessed by doctors back in Belgium in order to see what the situation will be for Sweden, when qualifying action gets underway on August 31st.

Team HRC’s Calvin Vlaanderen took a solid fifth place overall at Imola circuit after eight-three results weren’t quite good enough to see him finish on the podium for the second consecutive race.

Unfortunately his chances of backing up his second place in Lommel at the last round where thwarted almost straight away when another rider crashed right in front of the Honda CRF250RW rider in the second turn. By the time Vlaanderen had freed himself from the carnage, he was well outside the top 20 and in damage limitation mode. Once he found his rhythm, he quickly passed a number of riders and was inside the top 10 after just six laps. He made a couple more passes before the end of the moto but was unable to get close to the top five, which would have given him that outside shot of a podium.

Race two went a lot better as he started around the top five, quickly moving into third place where he remained for the rest of the moto, despite a late tip-over with a couple of laps left. This left him with eight-three results which were five shy of third place, which would have been a fairer reflection of the speed he showed over the weekend.

Next weekend gives Vlaanderen the perfect chance to get back on the box as the series heads to Sweden for what will be round 16 of the 2019 world motocross championship.

It is just an amazing feeling to have won this third world championship. To fight back after two really tough years and to even overcome a difficult round earlier in the year, it is just really, really great to have become champion. A big thanks to all of Team HRC, both here at the races and back in Japan who have supported me throughout this period, during the good and the bad. It is a real family I have under this awning and I am truly thankful to be riding with them for so long. We have all worked extremely hard this year to improve myself and the Honda CRF450RW but it has worked amazingly well. We have had great starts, zero issues, and I just feel really comfortable each time I get on the track, whatever the conditions.

I am struggling to say much more but it really has been an incredible experience and I’m so glad that a lot of fans from Slovenia could come out and witness this moment too. My previous wins have been in the USA, but now to have so much support here at Imola, and just throughout this year is something I am really appreciative of. Thank you to everyone who has been with me on this journey, fans team members, everyone, it means so much to me.

Unfortunately the day didn’t go very well as I got 14th in race one. I just couldn’t find a good rhythm and struggled on this tight and technical Imola track. Then in the second moto I had a crash right at the beginning, and then as I was getting going, another rider made a mistake and I crashed and hit my shoulder pretty hard. I had to pull off and now I will get back to Belgium in order to get it checked out, to see if I can ride in Sweden or not next weekend.

It wasn’t my best day today. I got a decent start in the first moto but got stuck behind a crashed rider in the second turn and that put me outside the top 20. I think I came from around 22nd to 8th which took a lot of effort on this hot day and I was quite tired after the race with all the energy I expended passing those guys. The second race went a lot better and I was around fourth, quickly passed into third and then I rode there the rest of the race. Unfortunately I crashed in the last two last laps but I was still able to finish third. So I went eight-three for fifth overall which is solid, but not what I’m after as I hope to be on the podium.

I am so proud and happy for Tim to have won this MXGP championship. It certainly hasn’t been easy these past couple of years but he never gave up and this title is a reward for all the effort he has put in. From his first victory at Trentino, we knew it was going to be a special year and he just kept up that level of riding which allowed him to win this title with so many rounds left to race. He has now joined an extremely special group of riders in Honda history, winning his third championship with the brand and he fully deserves it. He is a very special talent.

Unfortunately Brian wasn’t able to finish the second moto and he will get checked out as quickly as possible in order to determine the next course of action.

After his podium in Lommel, we were really hoping that Calvin could get up on the box again here in Imola. Unfortunately another rider crashing really ruined his chances on the very first lap because he wasn’t able to get back to a high enough position after that. He still rode well though and in the second moto he showed his true position with a third and that is a real reflection on how he was riding this weekend. 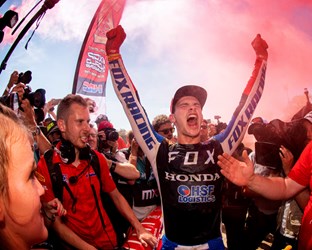