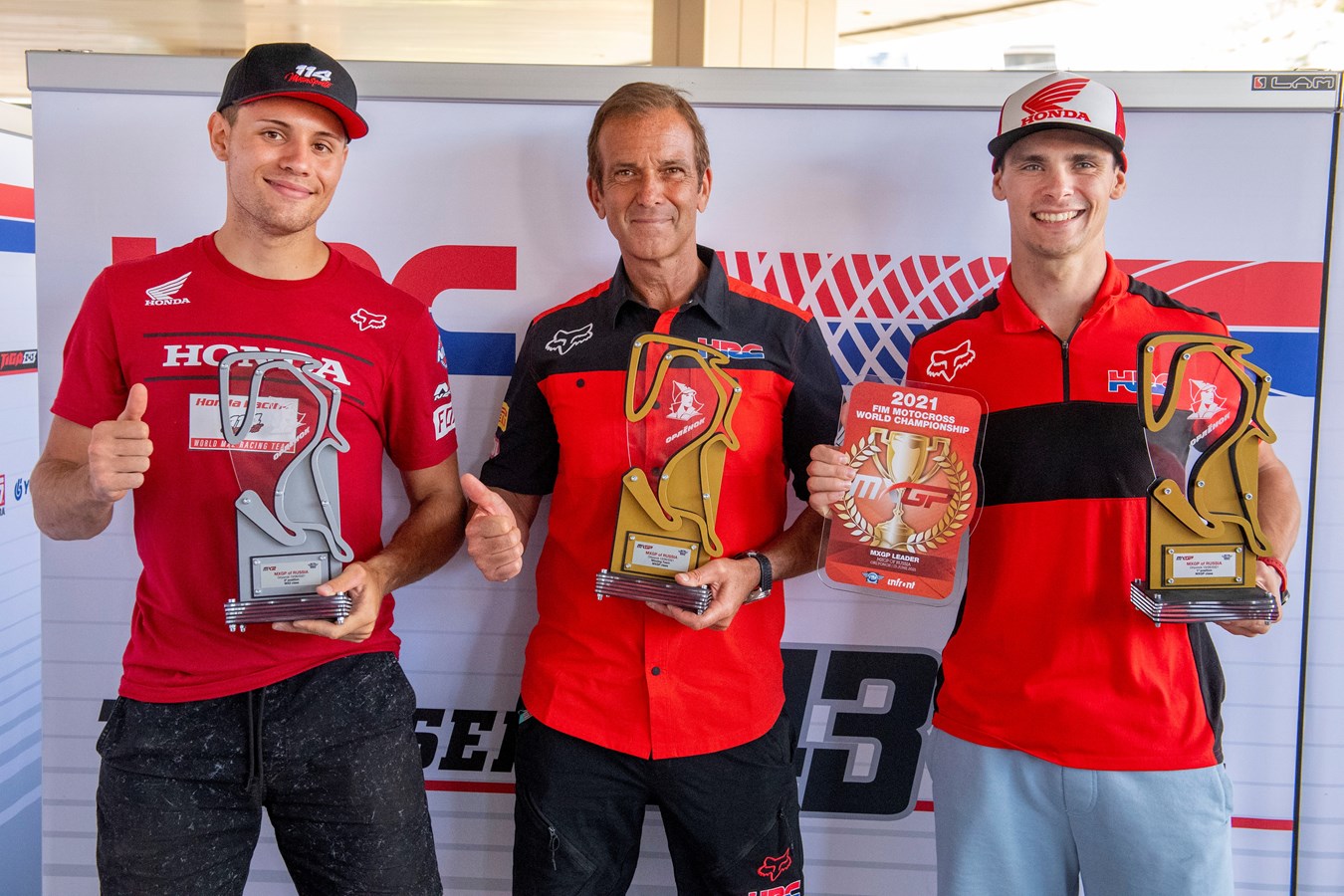 The 2021 FIM World Motocross Championship began today at the Orlyonok Circuit in the Krasnodar territory of southern Russia. Orlyonok's Black Sea shores grace the hillside and make a picturesque backdrop to the notoriously challenging hard-packed track.

Mirroring the 2020 season, a revised race-day schedule was in place in Russia, meaning Free and Timed Practice sessions are run on Sunday morning - followed by racing from midday (local time) onwards. This quick-format means time for track acclimatisation and bike adjustments are at a premium.

In the MX2 class it was Team Honda 114 Motorsport’s new signing Ruben Fernandez who showed early Free Practice form with fourth place in the session, followed by Team Honda Racing Assomotor’s Stephen Rubini in seventh. Both riders struggled to adjust to changing track conditions and in Timed Practice they finished the session with Rubini in 10th and Fernandez in 11th.

Fresh from recently winning the Spanish National MX2 Championship riding the CRF250R Ruben Fernandez blasted his Team Honda 114 Motorsport’s Honda into an early battle for the lead in race one. The Spaniard fought a gallant race with attacks from all angles throughout the moto, eventually bringing his Honda home in second. A fantastic result for Honda’s new MX2 rider.

Race two saw a similar start for Ruben, powering his Honda into an early second place and again doing battle at the sharp-end of the pack. Small mistakes towards the midpoint of the race cost Fernandez two positions, but he managed a pass on the penultimate lap to take third place in the race and a very well-deserved second place overall and second in the World Championship standings.

Recovering from a recent broken C6 vertebrae and a damaged nerve in the shoulder, Team Honda Racing Assomotor’s Stephen Rubini showed great promisee in race two holding onto fourth position in the early laps, but a big crash followed by an off-track excursion spoilt his chances of a better overall result.

As the gnarly Russian circuit began to bake and cut-up the gate dropped for the first time in 2021 for the hotly-contested MXGP class as Team HRC’s Tim Gajser fired his CRF450RW into an early lead and soon settled into an unbeatable pace - clearly enjoying the track and the on-point setup of his HRC machine. Gajser took race one easily with almost 17 seconds in-hand.

Race two drama struck as the riders hit turn one and Gajser was pushed far off-line and crashed as the pack raced away leaving the Slovenian down in 24th place. As an indication of Tim’s speed on the HRC machine, as he crossed the line to complete lap one he’d already made his way up to ninth position; and by lap six he was in second place. Setting sector times alight, Gajser was clearly the fastest rider on track and took the lead on lap 11 - going on to win the race and overall GP win, putting Team HRC in the World Championship lead after round one.

"First of all I’m really happy that we are back racing. It has been a really long period without races and it is great to see so many fans here in Russia.
"In the first race my start was good, and my riding was smooth and consistent. I was able to get into the lead quickly and control the moto. Then in the second race my jump out of the gate was good but someone on the inside crashed and pushed me off the track and I even jumped off the bike so when I remounted I was way back in the pack. I searched for some lines in the first few laps, trying to pass as many people as possible. I got into second and looked where best to make the move and once I got into first I made a gap and took the win.
"I’m very happy with how it all went this weekend."

It’s my first ever GP podium, so it feels crazy and I’m also now second in the World Championship.
The first race was a great way to start the season and I’d like to say thank you to my family and to my team - Honda 114 Motorsports and all the sponsors for supporting us to get here.
The track was prepared quite well, but it was very rutted and slippery especially during the first laps. Because I’m a big guy it can make it very hard when you exit from a tight turn into a very steep uphill, so I tried to maintain my momentum on the track to make sure I had a fast lap.
I think you can see from the good starts I had today that I am really happy with my CR250R and I could easily fight up at the front with all of the guys. I felt super-comfy on the bike and I think you can tell with my results.

We’ve had a very successful first round and now Honda is sitting first in the MXGP World Motocross Championship with Tim Gajser and second in the MX2 World Motocross Championship with Ruben Fernandez.
We are all excited to welcome Ruben to the Honda family and he recently showed his speed on the CRF250R by winning the Spanish National MX2 Championship - obviously gelling well with his new bike and team. Now to see his first GP podium on the same bike is spectacular and we’re really excited to see more from Ruben in the coming races.
Stephen Rubini has come back from a bad off-season injury and not at his full race-fitness level just yet. However, he started both motos well - race two in fourth position and held that position until a series of crashes dropped him back, so there are positives out of Stephen’s performance, although on paper it doesn’t show.
In the MXGP class Henry Jacobi made promising starts for his debut with JM Racing Honda and the CRF450R. I think in time these guys will realise the results they deserve to compliment the skills and effort that everyone puts in.
I think Honda had a really good showing in Russia today. Fernandez was fantastic and Gajser was exceptional - in particular race two when he was pushed wide, crashing in turn one and raced back through the pack to win. I’m really excited for the next rounds throughout July and into season.
It’s a double Honda podium in Russia and we are all delighted with today’s results.
6 Related Media 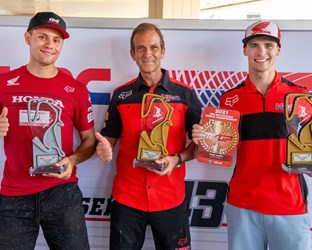