Glenn Irwin and Honda Racing UK have wrapped up the 2022 Bennetts British Superbike Championship the way the team started the year, winning aboard the CBR1000RR-R Fireblade SP. Glenn also secured the runner-up spot in the overall championship standings.
Getting the weekend off to a strong start Glenn secured pole position for yesterday’s eBay Sprint Race, which he followed up with a race win. Glenn was also in pole position for today’s two races, having scored the fastest lap times aboard the Fireblade. For the final race of the day Glenn made a superb recovery having dropped back to fourth in a battle with Danny Buchan, Peter Hickman and his brother Andrew. On the 12th lap he started making his move back into podium contention passing Peter to move into third.
Working his way through the podium spots Glenn was back in the lead on the 17th lap, and managed to hold off challenges from Danny and Andrew crossing the line to take his fifth win of the season.
It’s been a strong season for the Honda Racing UK team and Glenn, who finish the year as runners up in the Bennetts British Superbike Championship, which is Glenn’s highest finish in the championship to date. Across the year Glenn scored five wins, one second place and four thirds.
Meanwhile Glenn’s teammates have wrapped the season up with Takumi Takahashi in the points across the three races finishing 13-15-15. Ryo Mizuno finished today’s races in 19th place and BSB rookie Tom Neave finished just outside the points in 18th and 17th.
Away from BSB it’s also been a successful season for Honda in the Pirelli National Superstock Championship, where the CBR1000RR-R Fireblade SP continued its dominance winning the class for a second year with Davey Todd and the Milenco by Padgetts Motorcycles team.
Padgetts Motorcycles are a name synonymous in the British Superbike paddock where they have been winning British championships for seven decades. The first win was in 1967 with John Cooper, under the watchful eye of Peter Padgett.
Later in the 70s Clive Padgett won and at 18-years-old, he was the youngest-ever winner of a British title. Clive’s late brother Gary also won a title in the 80s.
With Clive taking over the reins of the dealership as well as the race team Padgetts success continued, with the last British championship won in 2005 with Leon Camier in the British Supersport class.
Fast forward to 2022 and after many successful years road racing, the Padgetts team are celebrating again in the British championship with Davey Todd victorious aboard the Honda Fireblade. Over the season Davey racked up four race wins, four second places and three third place finishes, which was enough for him to win the title at the penultimate round of the series at Donington Park.
Honda Racing UK and Honda UK Motorcycles would like to extend their congratulations to Clive, Davey and the whole Padgetts family and look forward to 2023.

It’s been a fantastic year, we started with the treble at Silverstone, but seemed to stagnate from there. Takumi my teammate worked through a swingarm option, which at the time wasn’t giving what I needed, but at Knockhill it then came to a level where Takumi had a better lap time, and I knew it was starting to come good. We made the change, which was an instant improvement. The Fireblade developed and we worked incredibly well, I also had some surgery on my shoulder which is something that hindered me. We then went to some physical tracks where we were able to fight, which showed that the bike had made a huge step but also physically I had. This weekend has been great, I did want three from three after yesterday, but I fought hard for the third place. In the final race things felt good and we instantly went into tyre saving mode, but then I had to work hard and I had a clear target to take the lead. The wins are for my team, they have worked so hard this year and it’s nice to be able to reward them with two wins and second overall in the championship.

I am honoured to have run with this team for two years. Today, I finished both races but wasn't able to score any points. I want to thank all the staff at Honda Racing UK and everyone at Team #88.

The final round was not a perfect weekend for me, but it was good to get points in all three races. I didn't have many races this year that I could be satisfied with, but after the Suzuka 8 Hours my rhythm has improved a bit, which is good. In our last race of the year, I'm not happy with the result, but I did enjoy it! Thank you for all your support over the past year!

This year is not how I wanted it to be, but it’s half how I expected it; I knew it was never going to be easy, but I didn’t expect it to be as difficult as it has been. There have been a few things that have gone against me and I’ve not made the best of some of the other opportunities I have had. But on reflection, it’s been a huge learning experience and I can’t thank the team enough for sticking by me in difficult times and keeping believing in me. I didn’t end the year how I wanted to, but I think we’ve shown small glimpses of potential throughout the season. I’m going to get to work in the off season, work on myself and I’ll come into 2023 a different person, stronger and ready to fight. 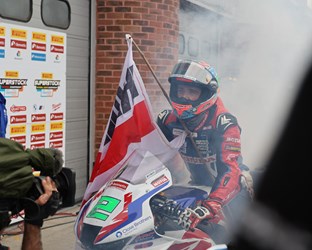