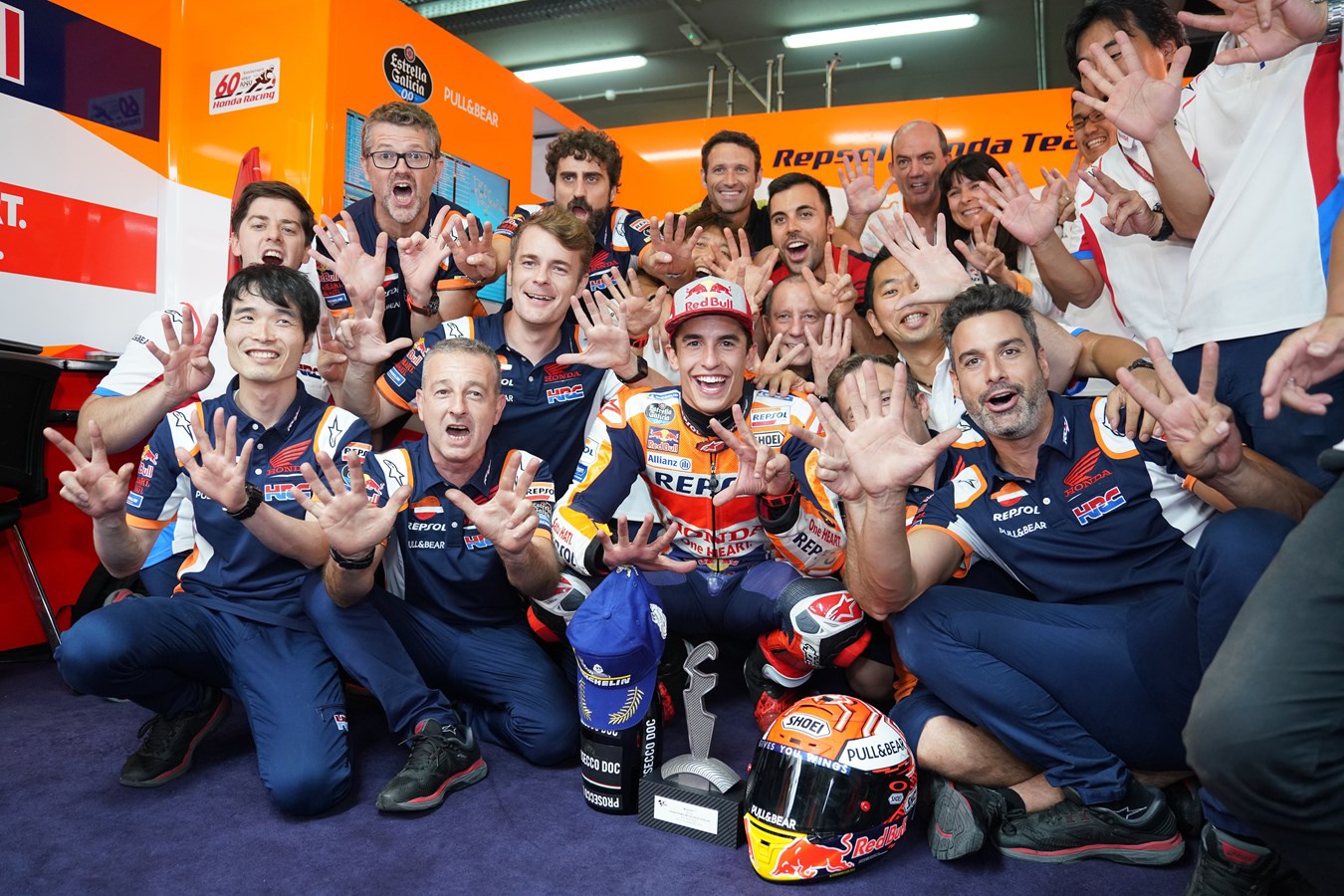 The 26-year-old has been very much in control here since Friday morning, when he completed FP1 an astonishing 1.617 seconds ahead of his closest rival.

There was also joy for Honda in the Moto3 race, which opened today’s 14th event of the 19 2019 season. Japanese rookie Ai Ogura (Honda Team Asia Honda NSF250RW) took his first World Championship podium result with a fine second place, the 18-year-old from Tokyo confirming that he has a great future in Grand Prix racing.

Marquez’s statistics continue to grow. Not only has he scored 78 victories across all three classes he has also achieved a total of 129 podiums and 89 pole positions. His victory record class by class stands at 52 in MotoGP, 16 in Moto2 and ten in the 125cc category, in which he made his Grand Prix debut in 2008. This year his record stands at eight wins, five seconds and one DNF, when he slid out of the lead of April’s Grand Prix of the Americas.

Starting from pole position today Marquez made a rapid getaway, taking the first corner in first position and then never letting his rivals get anywhere close enough to attack. After the first lap he was already 1.1 seconds ahead, by two-thirds distance he had grown his advantage to more than six seconds, then he eased his pace in the final laps to take the checkered flag 4.836 seconds ahead of runner-up Andrea Dovizioso.

Cal Crutchlow (LCR Honda CASTROL RC213V) rode a determined race around the magnificent MotorLand circuit, situated outside the ancient town of Alcaniz. The 33-year-old bounced back impressively from tumbling out of last weekend’s San Marino GP to qualify seventh and finish sixth, less than five seconds off the podium, despite making a few minor errors during the 23 laps.

Takaaki Nakagami (LCR Honda IDEMITSU RC213V) also had a strong ride to tenth place, having started from 14th on the grid. After suffering minor crashes in the last two races the 27-year-old from Chiba had an entertaining ride aboard his 2018-spec RC213V, battling back and forth with several rivals to finish at the head of the group, less than a second in front of Andrea Iannone. This was Nakagami’s eighth top ten of 2019.

Marquez’s team-mate Jorge Lorenzo (Repsol Honda Team RC213V) had another challenging weekend, still recovering from the troublesome back injuries he sustained at June’s Dutch TT. The five-times World Champion was fast in the early stages of the race, but as the race went on he experienced a loss of grip from the rear tire and was unable to maintain his pace. He took the flag in 20th.

Today’s racing marks the end of 11 consecutive European races. The MotoGP paddock now packs its flight cases and jets east for the Thailand, Japanese, Australian and Malaysian GPs. The 2019 season concludes at Valencia, Spain, on November 17.

“I was convinced about my strategy and what I had to do. I had a good feeling from when I left the box, so I knew I could push in the beginning and open a gap of four or five seconds and just keep it there, not pushing too much. I saw at one stage of the race that Viñales closed in a little, so I pushed a little more for two or three laps and I stabilised the advantage. It looked easy but it wasn’t, we have been working hard all weekend to find the limit. It was amazing to win here in front of our home fans so I have to say thank you to them all!”

“I’m happy with that – today was a race we had to finish after last week’s difficult weekend at Misano where there was no grip. I couldn’t wait to leave Misano and come to Aragon to start working for a good result. I lost a lot of time during the first few laps of the race with some battles with other riders, then in the middle of the race I ran off the track and lost another two places. The pace was pretty fast and I was happy enough with my own pace. Okay, I made mistakes, but all things considered I’m happy with sixth place. Hopefully we can do even better in Thailand.”

“That was a really tough race. First of all I made a big mistake at the start with a big wheelie. I didn’t expect that, because all weekend I’d had good practice starts. The big wheelie lost me a lot of time, so the first laps were really difficult, then when I tried to overtake Petrucci I wasn’t able to stop the bike, so I went out of the track and lost two more positions. After that I tried to calm down and keep my pace to the end. It was a long race because I was alone for many laps, but finally I caught the group ahead of me – Petrucci, Oliveira and Iannone. I tried my best and in the end I beat them to get tenth place. This isn’t a bad result but our pace wasn’t fantastic and we still have some room to improve.”

“At the start of the race I was very hopeful of a good result as I made a very strong start and I was quite competitive in the opening laps. Unfortunately I felt a lot of drop on the rear tire and I struggled for rear grip from early in the race. I tried to manage it by being as smooth as possible, but I dropped back little by little. It’s a pity, I would have rather started the race poorly and finished strong. But still we can take positives as we have learned more about the setting and I was pleased with how some sessions went this weekend. Congratulations to Marc and the Repsol Honda Team for a great win.”