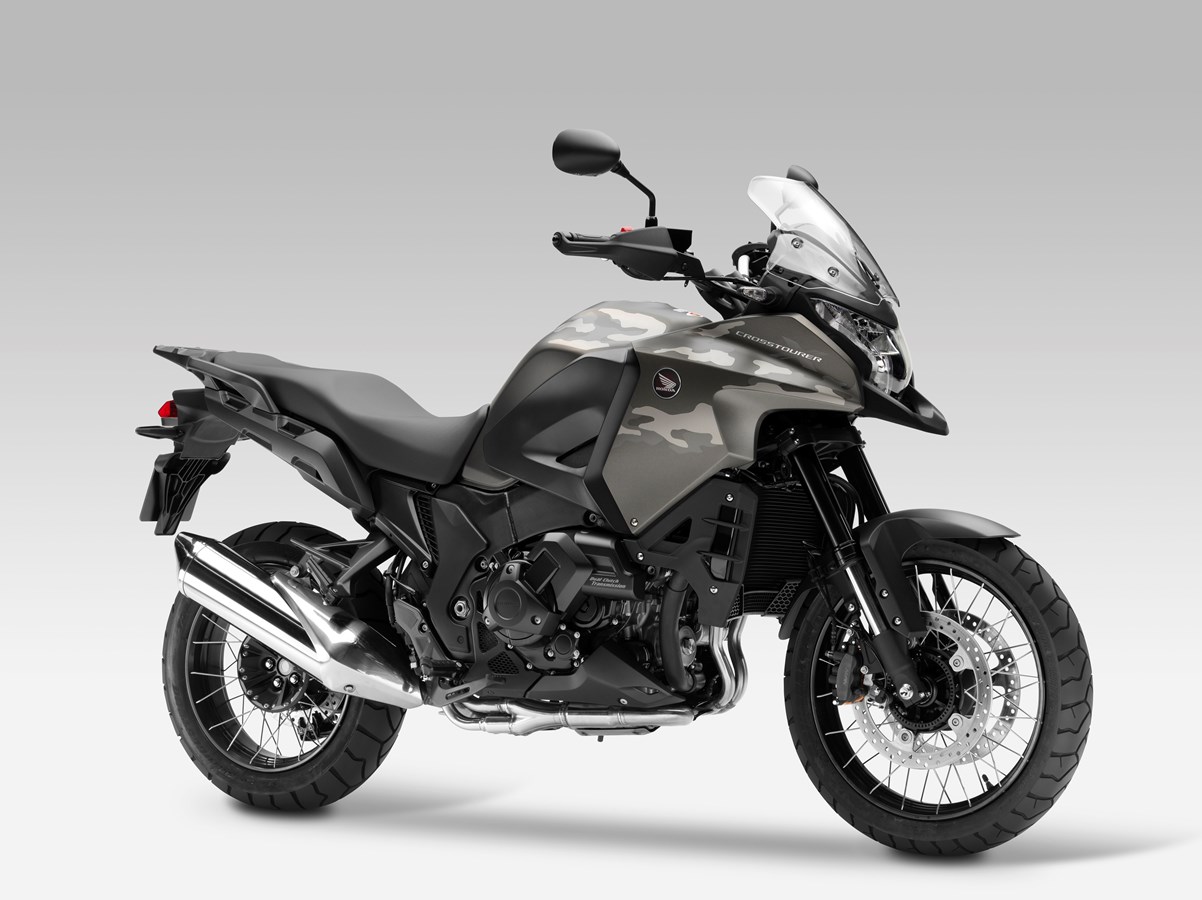 The Crosstourer, launched in 2012, is Honda’s range-topping adventure sports touring motorcycle. The original design team, led by Large Project Leader Yosuke Hasegawa, set out to create a machine that gave the rider a sense of challenge and the facility to explore. Japanese phrases used during concept creation and development translated into English as, “I can do this. I can go to a place like that”. “This” could be a long distance journey on fast major roads and motorways, or a sinuous ride to a remote destination in the mountains.

Driving the overall development vision was the concept of “sophisticated hard duty”. Accordingly, Honda’s engineers wanted to create a motorcycle that was fit for all purposes – a perfect travel companion – while also offering a premium and unique design complemented by cutting edge technologies.

And it did just that. Equipped with a 1,237cc V4 engine, advanced chassis and electronic package – Combined ABS, Traction Control System (TCS) and the option of Honda’s Dual Clutch Transmission (DCT) gearbox – the Crosstourer firmly planted a flag at the high-performance end of the adventure segment.

As a go-anywhere, do-anything tool it has few peers – but its real difference lies in the addictive power and soundtrack produced by its soulful V4 engine, something unique in this class. After two years and many tens of thousands of development miles, Honda’s engineers have chosen to evolve their flagship adventure sports tourer further, and the 2014 model features a host of detail upgrades to further enhance the riding experience.

Overall aim of the 2014 update is to improve the Crosstourer’s comfort, evolve its existing technology and apply new touches. The new Honda Selectable Torque Control system allows the rider to select three different levels to control engine torque and resultant drive to the rear wheel; the system can also be switched off. Honda’s six-speed DCT gearbox has also received software refinements to deliver an even more intuitive and natural performance, whether on highway or back road.

The seat has been modified to improve rider comfort and facilitate easier ground reach and a ‘wave’ design ignition key is now standard. Accessories – a key aspect of adventure bike ownership – have also been revised with new top box, heated grips and a low seat option.

The Crosstourer’s engine continues Honda’s proud heritage with V4 technology, with its uniquely smooth, flexible delivery of impressive power and torque. Offering precise control of this power thanks to its throttle-by-wire system, and an engaging, characterful sound - due partly to carefully-sized chambers in the exhaust - the Crosstourer’s engine is integral to its appeal.

The V4 configuration is slim and compact, reducing frontal area and aiding masscentralisation. It also features a very closely set pair of rear cylinders, making the engine narrower at the back. Further contributing to the 1,237cc, 16-valve engine’s compact dimensionsis Honda’s Unicam technology, also used on the CRF range of motocross machines. This SOHC configuration helps reduce the size and weight of the cylinder heads, and optimise combustion chamber shape.

A combination of a 76° angle between the two banks of cylinders and a crankshaft with 28° phasing between the crankpins virtually eliminates vibration. Since there’s no need for a power-sapping balancer shaft the result is higher output, and uneven firing intervals give an intimate connection to the engine.

Available as an option on the Crosstourer, Honda’s DCT gearbox offers a unique combination of direct riding feel and ease of use. A world first for motorcycles when launched on the VFR1200F in 2010, it delivers consistent, seamless gear changes, and very quickly becomes second nature in use.

The system uses two clutches: one for start-up and 1st, 3rd and 5th gears: the other for 2nd, 4th and 6th, with the mainshaft for each clutch located inside the other for compact packaging. Each clutch is independently controlled by its own electro-hydraulic circuit. When a gear change occurs, the system pre-selects the target gear using the clutch not currently in use. The first clutch is then electronically disengaged as, simultaneously, the second clutch engages.

The result is a consistent, fast and seamless gear change. Furthermore, as the twin clutches transfer drive from one gear to the next with minimal interruption of the drive to the rear wheel, any gear change shock or pitching of the machine is minimised, making the change feel direct as well as smooth. The Crosstourer’s ride-by-wire technology allows the system to electronically “blip” the throttle on downshift for even smoother, faster gear changes.

With extra benefits such as durability (as the gears cannot be damaged by missing a gear), impossibility of stalling, low stress urban riding, and reduced rider fatigue, DCT has seen increasing acceptance in the market: 50% of Crosstourer customers chose the DCT option across Europe in the first nine months of 2013, compared with 29% in the whole of 2012.

Three modes of operation are available. MT mode gives full manual control, allowing the rider to shift with the handlebar trigger control buttons. Automatic D mode is ideal for city and highway riding, and achieves optimum fuel efficiency. Automatic S mode is sportier and the ECU lets the engine rev a little higher before shifting up, giving greater performance. It also shifts down sooner when decelerating for extra engine braking.

In either D or S mode DCT offers immediate manual intervention if required – the rider simply selects the required gear using the up and down shift triggers. At an appropriate time DCT seamlessly reverts back to automatic mode, depending on throttle angle, vehicle speed and gear position.

Upgrades to the software and operating logic ensure an even more intuitive system; downshifts in D and S mode happen earlier for a more responsive feel and extra engine braking, making corner entry natural. Kick down is also smoother thanks to remapping of the ECU.

The Crosstourer’s relaxed riding ergonomics remain unchanged, but the seat has been re-shaped – with a slimmer front – to improve ground reach. Seat height remains 850mm but thanks to the narrower profile it’s an easier motorcycle to straddle, and ground reach is improved.

The diamond aluminium twin-spar frame is a hollow unit that employs quartered construction – this enables very precise control over the all-important weight/rigidity balance of each part of the frame. Rake is set at 28° with trail of 107mm and 1,595mm wheelbase. Kerb weight is 275kg, 285kg for DCT version.

And Pro-Link rear suspension combines excellent traction with refined ride quality. Both the fork and gas-charged shock are adjustable for rebound damping and spring preload, allowing riders to alter characteristics to suit their riding style and intended usage.

Combined ABS works between the dual front 310mm discs/three-piston calipers and rear 276mm disc/twin-piston caliper. It delivers balanced braking for more stable deceleration and the extra reassurance of an Antilock Brake System. If either wheel is about to lock up and slide, C-ABS momentarily reduces the hydraulic pressure being applied to the relevant brake and distributes the force optimally between both wheels, ensuring powerful and secure braking in all conditions.

Colours (three standard and one SE).

5-stage heated grips with indicator, replacing the previous 3-stage design, are now available from Honda Genuine Accessories. A new waterproof rear top box does away with the zip expander and, 60mm deeper, can take a full-face helmet. And an accessory low seat reduces the seat height by 20mm to 830mm.

Other Honda Genuine Accessories for the Crosstourer include:

Pannier set. Specially designed and fully integrated 35L (RH) and 39L (LH) square panniers. The left pannier can contain most helmets; the set fits directly to the motorcycle and matches the top box.

Side deflector kit. Set of left and right deflectors that protect the rider and pillion from the elements and reduce turbulence. Made from black polyurethane.

Outdoor cycle cover – protects the bike from the elements. 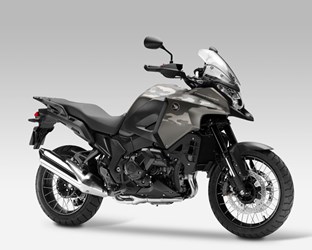