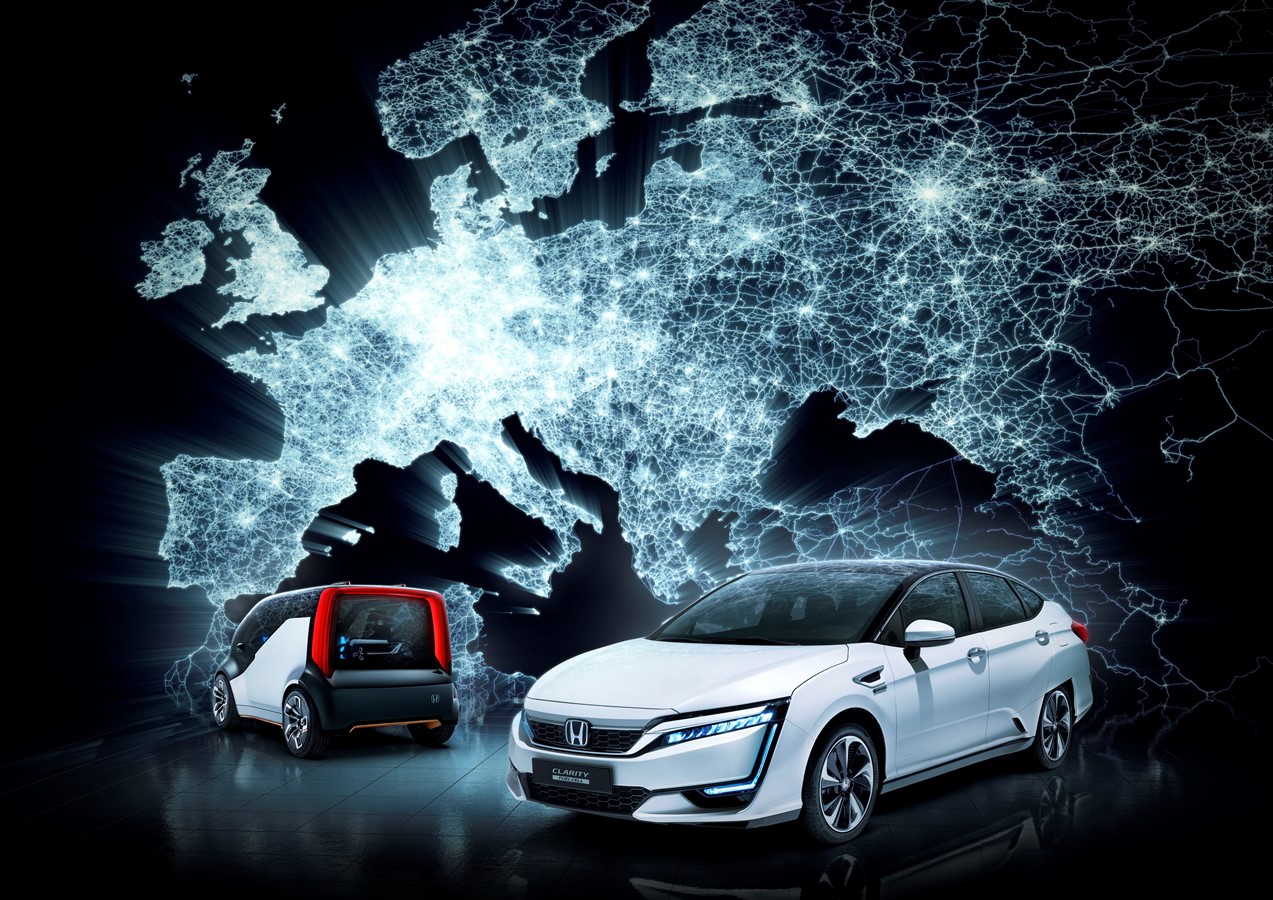 Honda Motor Europe’s President and COO, Katsushi Inoue, has revealed key details of the brand’s new ‘Electric Vision’. Speaking at the 2017 Geneva Motor Show, Inoue-san outlined Honda’s commitment to an electric future in Europe, with a specific aim to have electrified powertrains in two thirds of European cars sold by 2025. The announcement confirms that Europe is at the forefront of Honda’s global electric vehicle strategy.

Announcing the strategy in Geneva today, Inoue-san said: “We will leverage Honda’s global R&D resources to accelerate the introduction of a full portfolio of advanced, electrified powertrains for the European customer.”

Honda’s focus on electrification in Europe will initially be driven by a roll-out of hybrid technology across its automobile range. The first new hybrid model, which will feature Honda’s two-motor hybrid system, will go on sale in 2018.

Honda’s Clarity Fuel Cell model will be showcased at Geneva, following the arrival of the first cars in Europe at the end of last year. The Clarity Fuel Cell is the world’s most advanced fuel cell vehicle and delivers a class-leading maximum range of 700 km (435 miles)*

The arrival of Clarity Fuel Cell in Europe as part of the Europe-wide HyFIVE (Hydrogen For Innovative Vehicles) initiative reinforces Honda’s commitment to drive the adoption of fuel cell vehicles and the creation of a viable hydrogen refuelling infrastructure across the region.

The announcement of the electric vehicle strategy for Europe comes just weeks after Honda was confirmed as the fastest growing mainstream car brand in the region in 2016. The full-year data from European industry body ACEA shows that total sales for Honda in EU and EFTA countries in 2016 were 159,126 units to the end of December, an increase of 20.8% per cent compared to same period in 2015. Honda’s growth significantly outpaced the results for the EU passenger car market as a whole, which saw a year-on-year increase of 6.8% per cent.

Making its European show debut in Geneva, the Honda NueV is a pure-electric concept car with a unique ownership proposition and a state-of-the-art ‘emotion engine’ that can learn about its driver. The NeuV (pronounced “new-vee”), which stands for New Electric Urban Vehicle, was conceived to take advantage of the fact that privately-owned vehicles sit idle for 96% of the time.

The pure-electric concept car explores a financially-beneficial ownership model for enterprising customers, by functioning as an automated ride sharing vehicle when the owner is not using the car. It would pick up and drop off customers at local destinations, and could also sell energy back to the electric grid during times of high demand when it‘s sitting idle, further monetising the vehicle’s down time.

NeuV also functions as a thoughtful and helpful AI assistant utilising an ‘emotion engine’ called HANA (Honda Automated Network Assistant), which learns from the driver by detecting emotions behind their judgments. It can then apply what it has learnt from the driver’s past decisions to make new choices and recommendations.

A full touch-panel interface enables both the driver and passenger to access NeuV’s simple and convenient user experience. Outstanding outward visibility is afforded by a sweeping panoramic windscreen and a dramatically sloping belt line that make manoeuvring simple. Entry and exit from the vehicle is made as easy as possible, even in tight parking spaces, with a complete side panel that opens out and backwards to create a large opening.

NeuV has two seats with luggage space behind, which also stores the ‘Kick ’n Go’ electric scooter concept designed for ‘last mile’ transit. The scooter concept is inspired by Honda’s original scooter of the same name launched in the 1970s. The new design is powered by a detachable battery rather than a chain mechanism, and can be recharged through a connection in NeuV’s luggage space. The new ‘Kick ’n Go’ concept demonstrates that Honda is looking at all aspects of affordable electric mobility that can enrich people’s daily lives.

Honda recently demonstrated NeuV as part of its ‘Cooperative Mobility Ecosystem’ at CES 2017 in Las Vegas, showing the potential power of artificial intelligence, robotics and big data to transform the mobility experience of the future and improve customers’ quality of life. The brand’s exploration into electrification will not stop at cars: Honda’s intention is to develop electrified and efficient power solutions for all of its product areas, including motorcycles and power tools.

Honda is creating technologies and products that advance the company’s clean, safe, fun and connected brand values. These efforts include advancements in automated vehicles, connectivity and ultra-low carbon mobility. Honda is also testing advanced automated vehicle technologies in Japan and North America and is targeting 2020 for the deployment of highly automated vehicles. Honda is also working to fulfill its environmental and safety vision: “to realise the joy and freedom of mobility and a sustainable society where people can enjoy life.”

The HANA ‘“emotion engine’” is a set of AI technologies developed by cocoro SB Corp., which enable machines to artificially generate their own emotions.

Honda has revealed the all-new Civic Type R at the 2017 Geneva Motor Show, ahead of the model’s European launch in the summer. The new car builds on Honda’s heritage in developing high-performance hatchbacks, and represents the segment’s ultimate expression of dynamic purity.

Sharing the same fundamentals as the new Civic hatchback, the new Type R has been engineered from the ground up to deliver the most rewarding drive in the hot-hatch segment – both on road and on the race track.

The 2.0-litre VTEC TURBO ‘heart’ of the multi-award-winning previous generation Type R has been optimised and refined and now produces 320 PS with peak torque of 400 Nm. Throttle response and driveability have improved thanks to optimised engine control settings.

The smooth and precise six-speed manual transmission is further improved by a rev match control system, ensuring no compromise in the Type R’s intimate, rewarding connection with the driver.

A stiffer chassis and revised suspension

The new Type R takes the lighter, more rigid body shell of the new Civic hatchback and adds further use of adhesive in key areas. Compared to the previous Type R, torsional rigidity is further improved by 38%.

The front Macpherson strut suspension of the standard hatchback is revised with new geometry to minimise torque steer and maximise sporty handling. At the rear, the new independent multi-link system of the standard car is improved with the use of unique high rigidity suspension arms.

An enhanced selection of driving modes give the car greater usability compared to the previous Type R. A new ‘Comfort’ setting sits alongside agile ‘Sport’ and track-focused ‘+R’ modes. Each selection tailors the adaptive dampers, steering force, gear shift feeling and throttle response of the car on demand.

The all-new Type R has a more comprehensive aerodynamic package than the previous model, including a smoother underbody, front air curtain, a lightweight rear wing and vortex generators at the trailing edge of the roof line. The muscular, aggressive body has a best-in-class balance between lift and drag, contributing to greater high speed stability.

Production of the new Civic Type R is anticipated to start in summer 2017 at Honda of the UK Manufacturing (HUM) in Swindon – the global manufacturing hub for the 10th generation Civic hatchback.

The Type R will be exported across Europe and to other markets around the world, including Japan and the US. Its arrival in North America will mark the first time that any Honda-badged Type R has been officially sold there.

Alonso and Vandoorne will pilot the recently revealed McLaren Honda MCL32, powered by the Honda RA617H, 1.6-litre V6 turbo charged power unit which incorporates an advanced Energy Recovery System. The MCL32 follows the evolutionary footsteps of its two immediate predecesors, the MP4-30 and MP4-31, but has been overhauled in every area as the design team look to capatilise on the new aerodynamic regulations introduced for the 2017 season.

Honda has launched an advanced ‘connected car’ device which delivers a comprehensive ‘digital concierge’ service for owners. The ‘My Honda’ device plugs into the car’s control unit, and provides a raft of safety, security, vehicle care and convenience functions, all of which are accessible via an iOS or Android smartphone app.

Announcing the launch of the new on-board technology, Philip Ross, Senior Vice President of Honda Motor Europe, said: “The ‘My Honda’ app is designed to assist our owners in a variety of ways, whether they’re behind the wheel or have left their car parked up. We’ve also made it easier than ever for customers to contact their dealer, simplifying service bookings and keeping them up-to-date with our latest cars and innovations.”

Distinctive, bold and individual, the Black Edition further enhances the sculptural lines of the HR-V with a range of exterior and interior styling accessories.

The pack features sporty front and side skirts, a rear diffuser and mirror caps - all in Berlina Black and also available in Orange.

The centre blade of the all-new Civic Type R wing is made out of carbon fibre, featuring a red accent while the side wing tips finished in body colour.

Crafted in black anodized aluminum and featuring a red illuminated Type R logo, the illuminated door sill trims protect the inner door. The front trims are illuminated whilst the rear trims are non-illuminated.

First shown as the Active Life Concept at Frankfurt Motor Show 2015, Honda has turned the unique in-car bicycle rack in to a reality

The device allows a number of different passenger and bicycle combinations within the Civic Tourer’s class-leading load space. A driver and passenger can sit up front with two full-size bicycles securely mounted behind them. Alternatively, just 40% of the rear bench seat can be folded down, mounting one bicycle in the load bay whilst allowing space for additional passengers and luggage.

The In-Car Bicycle Rack can be combined with existing Honda accessories, such as the boot lip protector, boot side net and roof cross bars, providing an even more versatile car that suits an active lifestyle. 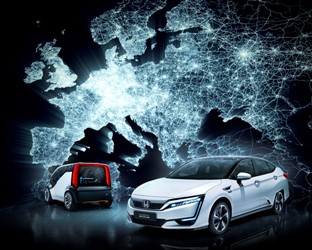